Hope everyone had a fun and safe holiday. We had a great time visiting friends and eating way too much. 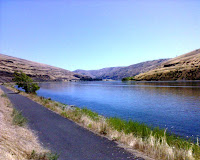 A heat wave is sweeping across the Northwest. Yesterday morning we went on a 4th of July family jog/hike. Jeanie and the pups came along. It was a nice and easy 3.5 mile trip. At 9.am the temperature was about as hot as it's been all year. By early afternoon it was in the 90's. Very hot for Pullman. We spent the afternoon and evening down in the Lewiston-Clarkston Valley for BBQ and fireworks on the river. BBQ - thumbs up. Fireworks - thumbs down.

Since I had today off as well, I thought I'd take a little drive to try a new run at Boyer Park on the Snake River. This is where we often go when we "go to the river," but I had never ran on the 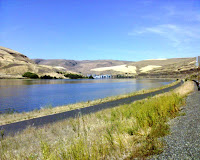 bike path before. Another reason I wanted to go here today was because temperatures were forecast to hit 100 degrees and the Snake is always so nice and cold. Too cold unless it's at least in the 90's. And the location isn't so close that I would make the drive often with gas prices where they are. But hey, I had the day off and it's summer, right?

Just as I started my run an old man carrying a fishing pole and tackle box looked at me and Sadie and literally stopped walking to tell me as I ran by, "Son, it's too hot today for that activity." And he didn't say it as a comment or friendly advice. He really seemed to have expected me to stop running. Like it was an order or something. I smiled, but not too big because I wanted to conserve as much energy as I could because it really wa

s too hot to be doing this kind of activity.

The path (the Snake River Trail) is very flat and stretches for about 3 - 3.5 miles. Mapmyrun.com says it's 3 miles. But all the park websites say it's 3.5 miles. So I'll just call my out and back 6 miles to be on the conservative side. HOT HOT HOT - but since it runs along the river Sadie was able to jump in to take a quick soak anytime she wanted to - which was often. As hot as it was the run was quite enjoyable. As you can see from the photos the landscape is pretty spectacular. And it's definitely one of those times where a camera phone can't even come close to capturing the feel of the scenery. 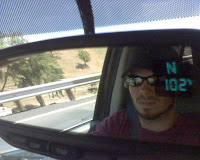 After the run Sadie and I jumped into the river for a swim. (Have I mentioned how hot it was today?) The water was the perfect remedy for the heat. The kind of cold where you would dare someone to jump in. Of course, this is coming from a Texan who is used to swimming in rivers with temperatures near boiling. :)

All and all a good summer day.

Off day tomorrow. It is supposed to cool down a bit this weekend. I hope so.