If I had to use one word to describe today's race it would be: hippopotamus. Not that hippopotamus actually relates to anything about the race...I'm just kind of delirious right now, and maybe a little dehydrated, and maybe just a little schizophrenic (but that has nothing to do with my running).

The Brundage Mountain Festival Run in McCall, Idaho. Turns out that the festival is mainly for mountain bikers and the trail run is something that's relatively new. There were hundreds of bikers and only a few dozen runners. The race is run at Brundage Mountain ski resort. Runners began at 9am and bikers began around noon, so no sharing of the trails was needed. And they let dogs run! So Sadie went along with me.

I had never run this course before and the course map at check-in had much to be desired. So I had no idea what to expect. The only two things I did know about the course was that the water station (the only one) was at the top of the mountain and that from the top is was a spectacular 4.5 mile downhill single-track to the finish line. Oh, and I also knew that the course was between 10.5 and 11.5 miles long. No one, not even the race director, was really sure of the exact length. I thought that was kind of funny. Online it says it's a 10.5 mile race on the main page, but past year results call it 11.5 miles. So I'll call it 11 for blogging purposes just to split the difference.

I started at the back of the pack with the other two runners with dogs. I was expecting the race to just start climbing up to the top of the mountain but NO, that would be too easy I found out. We started going down right off the gun and the top of the mountain, where I know I must be at some point, was getting farther and farther away. :( After a mile or so I realized that this was going to be a lot tougher race then I expected. There were no mile markers and I didn't have a great idea how far I'd been or where the course was going, so I had a lot of difficulty pacing myself and mentally preparing for the next 20 minutes, the next 40 minutes, etc. There was way more elevation gain on this course than what I'm used to running on Moscow Mt. Not as much as some of the runs I did in Colorado and New Mexico in May, but that was a long time ago in the running world. My legs were heavy early on and I wanted to blame that on my almost complete lack of sleep last night at the campground (serious wind storm and VERY loud tent neighbors) but my dad told me that most people don't sleep well before big races so I wasn't allowed to use it as an excuse. So, unfortunately, I'm not going to use that as an excuse. :)

Before the race I was joking with Jeanie that I hoped Sadie wouldn't slow me down (she always runs circles around me) but with the distance and heat I had to stop four or five times to fill up her water bowl for her. I carried 42oz in my fuel belt and also my hand held. The belt was enough for Sadie for the entire race and the hand held was enough for me with the re-fill at the top.

And it took me a while to get to the top. Basically from where we started heading back up after the downhill start it was a continual climb to the top. There were very very few downhill dips or flats to give the legs a mini-break. I walked maybe the last 15 minutes to the top. Very tired legs. It was kind of a wake-up call to me. I've been feeling so strong on the trails I run at home that I was expecting to be strong on the climbs today. But now I realize that my climbs at home are wimpy. There is a whole new world of trail running out there. So it was a good experience and showed me some things I need to work on.

The last section of downhill was much better. My legs were still pretty shot but I definitely got a second wind. And so did Sadie. We cruised by a few people and even passed a couple cold water creeks that both of us dipped in. The cool thing about running with Sadie is that it kept reminding me that even though this was a race I could still enjoy it and have some fun. Because Sadie doesn't like it when I'm too serious. :)

I crossed the finish line in 1:58:00 (they didn't give seconds). So, under 2hrs...not bad I guess. The top male finished at around 1:25:00 and the top female around 1:38:00. Out of the 30 or so runners I probably finished right smack dab in the middle. And I did get some bling-bling!! For my second race in a row I finished 3rd in my age group! (never mind there were only four in my age group...) I received a medal that I'll wear proudly to work all next week. and to bed. Oh, Sadie got 1st place in the dog division, but they didn't have a medal for her...

So there you have it. It was a tough race for me. Probably the overall toughest run I've done since I've started running. It was a great experience and I just love trail running. 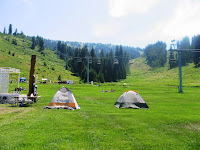 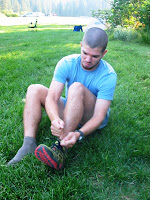 Lacing up for the big race
(my head really isn't that big...the lighting was kind of weird) 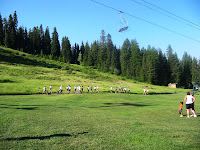 And they're off! Pulling up the rear are Scott 'n' Sadie. 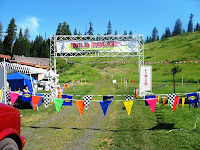 Finish line, and still no Scott. 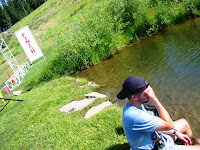 Why oh why am I not home watching
cartoons on a Saturday morning? 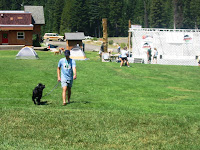 Walk of Fame.
Sadie is the lone audience member
to witness my medal ceremony.
(Yes, it was my ceremony.) 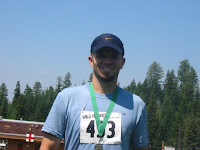