I love these mountains.

My buddy, Buzz, and I went this past weekend for a big run. We ran up to Ice Lake and then grunted/climbed from there up to Matterhorn, the second highest peak in the Wallowas.

At 21.5 miles and over 6,000' of elevation gain, it was easily my longest outing since March. This is very good news. My recovery has been slow and gradual, but so far it seems that the patience is paying off. The Achilles finally feels strong enough to handle some longer stuff like this. I don't feel like I'm out of the woods yet, but it's getting close.

Here are some of the scenes from our run. Not a bad place, huh? 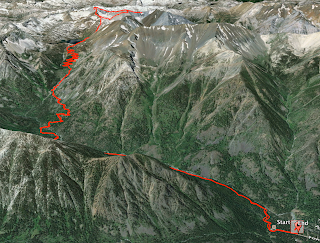 7 comments
Email ThisBlogThis!Share to TwitterShare to FacebookShare to Pinterest

Race #1 was a little light on the 'mountain' part of a mountain run, but race #2 promised to give the go-up legs a burn and the go-down legs a quad thrashing. The course was a simple 'go up to the top of the peak and then come back down' loop.

What this course lacked in single-track (there was none) it made up with incredible views (there were a lot).  There were a couple mile of smooth dirt road at the beginning, then most of the course was rocky double-track that climbed to Chewelah Peak, and then the last three miles consisted of a couple bombs straight down ski runs that had only hints of road or trail under the loose, ankle-turning rock.

We were climbing from the start at a comfortable pace. I was expecting to see a few guys shoot up ahead on the runnable climb, but no one really did. I met Chris, a well-known Spokane runner/coach, in the beginning minutes before he took off and separated himself from the group little by little. After about a half mile I was running with a guy named Royce as Chris stayed just ahead of us.

About two miles in, Royce and I see Chris stop suddenly on the road a little ways ahead of us. He has to pee? Rolled an ankle? As we get closer he turns back to us with a smile, "Big black bear just walked across the road. Just waiting on you guys -- safety in numbers." I pulled my camera out just in case I could catch a glimpse, but it was gone and I wasn't going up in the trees to look for it.

The three of us ran together for a bit before Chris started pulling away again (he's a road runner with quite a resume and I had no intentions of trying to keep up with him on the 'speed' sections). About four miles in the grade started to increase a little. Royce and I were still running together. We'd hit a bunch of switchbacks and Chris was long gone. I assumed we wouldn't see him again.

After some huffing and puffing and hiking, we finally reached the summit 6.5 miles in.  The race starts and finishes at 3,900' and the peak is just under 5,700'. So all the elevation we just gained in 6.5 miles we had to lose in only 3.5 miles. I knew coming in that the race finished with big downhills, so I was hoping I had my downhill legs that I'd been missing the last month.

Straight off the peak I pulled away from Royce. It was straight down a long, rocky ski run with not much to call a path. Near the bottom of this first run I crested a section and - to my surprise - I saw Chris straight below me maybe a quarter-mile ahead. At that point I had a pretty good idea that I did have my downhill legs today, and for the first time I realized that I may have had the advantage on the gnarly descents and that I might be able to catch him.

Before I knew it, I was about one hundred yards behind him just as we hit a short section on a double-track that turned back up the hill. I figured I had the downhill legs to pass him once we hit the next descent, so I just stayed back to save my legs as much as I could. Once the double-track started descending again around mile 8.5, I caught up with Chris and then eased by after chatting for a bit.

After a short, steep climb at mile 9 reduced me to a hike I must have been only a few meters ahead of Chris. But then the course turned off the road for a steep, rocky, mile-long descent down another ski run to the finish line. I figured as long as I didn't crash I was in good shape. I took off and glanced back about a half-mile later to make sure he wasn't on my tail. It was a nice little quad-ripping descent. I had put some space on him, and I came through the finish line in first place. That's only happened a few times, and it's still a pretty cool feeling to be the first one to cross the finish line. (official results)


The final race of the series is the Wild Moose Chase Trail Run, a 25k on Mt. Spokane at the end of September. As long as I don't have any Achilles setbacks, I should be there. So far, the recovery has been going well. This week I'm upping my long run to 14 or 15 miles -- fingers crossed. I'm dying to get some big miles in again.

Scott
9 comments
Email ThisBlogThis!Share to TwitterShare to FacebookShare to Pinterest