We had a great time at this winter's second Pullman Winter Ultra event. The weather was again very spring-like with temps in the 40's and no snow or ice to be seen for miles.

I gave Sadie the day off as she's been showing a little bit of pain in her front left leg. This is the second time in the past three months I've had to give her some time off. Hopefully an extra-extended rest will be all she needs. I don't think a trip to the vet is necessary quite yet, but if she's hurting any after this break than I'll probably bring her in. :(

The course is four 7.75 mile loops on a paved bike path that loops around Pullman. I had a nice run and was holding on to a 4-hr pace (my hey-why-not-give-it-a-shot goal) through three loops. The last loop was tough and I slowed quite a bit for a finish time of 4:16:38, which was still good enough for a 50k PR.  (results)


On the schedule now are some light weeks and a few local for-fun races before I start upping the miles to get ready for Scotland.


Oh, and in the last few days winter has finally arrived in Pullman. 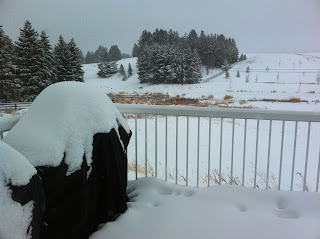 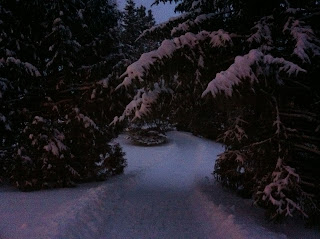 7 comments
Email ThisBlogThis!Share to TwitterShare to FacebookShare to Pinterest

I had so much fun running the New Year's Eve Marathon in Dallas with my sister, Melanie. Running with family is a special treat that I'll never get tired of.

The holiday break was a lot of fun. I have family and friends scattered between the Austin-area, Dallas and Houston (where I'm from), so I spent a good deal of the trip driving back and forth across the state. This was my longest stay back home since 2005.

The marathon was about five minutes away from Melanie's home, which was about as good as having a hotel room on the start line. Temps were in the low 30's at the start, but warmed up nicely to the 60's. It was a beautiful day to run.

The course was a super-flat 6.55-mile "loop" done four times. The "loop" was actually a modified out-n-back, which meant we were going to be seeing the same 3-mile stretch of sidewalk a lot.

Melanie's goal was to break the 5-hr marathon barrier for the first time, and my job was to keep her spirits up by singing Broadway tunes to her the entire way.

One of the main benefits (the only?) of a multiple-out-n-back course is that you get to see your cheering section often. And we had a little cheering section, which was very nice.

I had a great time running with Melanie. And she did awesome. She smashed her PR and sub-5 goal with a 4:42:04.  Awesome. (full results)


I'm in "off-season" semi-rest mode right now. But that doesn't mean I'm not running.  I have another Pullman Winter 50k this weekend. BUT, I have taken several days off in the last two weeks, so I'm feeling pretty rested/restless.


8 comments
Email ThisBlogThis!Share to TwitterShare to FacebookShare to Pinterest