The plan is to at least start the 50 mile option with my dad and go as long as I can with him. I haven't tested my knee much the past couple week in hopes of rest being the miracle worker.

Weather is horrible in eastern Washington and I'm crossing my fingers that my flight will get out okay. If you hear from me before Saturday then it's probably a bad sign.

-Scott
11 comments
Email ThisBlogThis!Share to TwitterShare to FacebookShare to Pinterest

I found some great runner gear deals on this site [http://www.holabirdsports.com/].
Email ThisBlogThis!Share to TwitterShare to FacebookShare to Pinterest

In the back of my head I've been entertaining the possibility that I can still run Rocky Raccoon in a couple weeks. Not the 100, but the 50 mile option (with my dad). Two weeks before my first 50 Km in September I was having similar issues with my right kn 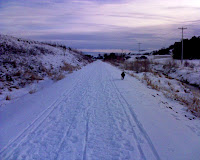 ee. A week before that race I did a test run and was able to go twenty miles relatively pain free. And even during the race the knee started acting up around mile six but I pushed through and when I finished there was no knee pain. In fact, since then I haven't had a single issue with my right knee.

My left knee is the issue now. I took it (my knee) for a mini test run yesterday and went six miles with less than exciting results. Though Sadie was semi-excited to go on a decent run, she still wants more. And my knee still needs more time.

Most of me is saying I need to just go down to Texas to cheer on my dad and don't even attempt to start the race. But a little part of me is thinking, "Hmmm, if I was able to push through it during a tough 50 Km a few months ago maybe I can push through it again." The Rocky course will be less demanding and time 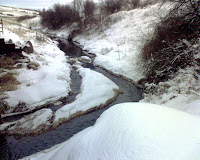 cut-offs really won't be an issue so I could go as slow as I need. Since it's a loop course the RD says as long as they're still supporting runners doing the 100 then he doesn't see why those doing the 50 can't stay on the course. So it's an extremely generous 29 hour cut-off. And I'd like to be on the course with my dad instead of on the sidelines.

As much as I'm trying to talk myself into at least giving the 50 a shot, I really want to have the willpower to skip it and focus on my April race in Spokane, which will give me the time to more slowly build up my running for the rest of the year.

In other news, several issues (specific dates, travel issues, etc) have led to my decision not the run the Comrades Marathon in South Africa this summer. This year isn't the right year for this specific race. This doesn't, however, mean I'm not making an international race trip this year. It just won't be the Comrades. I haven't used my passport in a couple years now and I'm itching bad. Right now I am looking at a July ultra in Iceland. Yes, Iceland. The Laugavegur Ultra Marathon. The timing is much better and, as a significant bonus, it's a trail run (Comrades is a road run). More details to come.

I've run a mile or two here and there with no knee pain. That's the good news. The bad news is that Sadie is on the verge of disowning me. After a year of constant running she's become quite spoiled. She told me the other night that if we don't go on a run of at least twenty miles in the next two weeks then she's going to file the necessary paperwork to get a new owner.

In the meantime, we play in the snow. 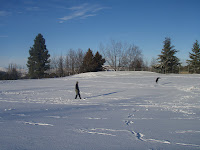 She loves the Frisbee 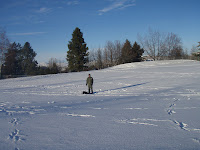 I'm looking forward to my trip down to Texas in a couple weeks to see everyone I haven't seen for nearly a couple years (Hi, Mom!) and to watch my dad run the Rocky Raccoon 50 mile.

Note From the Doctor

Hi, I am your doctor. I just wanted to tell you that you're pretty awesome and thanks so much for choosing me. Doctors aren't usually flattered, but I must admit I was blushing a bit to know that you picked me.

First of all, did I mention you were awesome?

Secondarily, about that knee thing of yours - don't worry about it. You're so awesome that you'll be fine.

Thirdily, here's a list of all the drugs you need to take just to make sure the knee is "really" okay. (Know what I mean? wink wink)

Fourdly, no matter how good your knee is feeling I advise you to take it easy with your running for a year or so. Why so long? Our practice requires us to advise patients on the ridiculously conservative side so we don't get sued.

In conclusion, you're without a doubt the coolest cat I've had as a patient in a really long time.


With a warm heart (and warm hands), 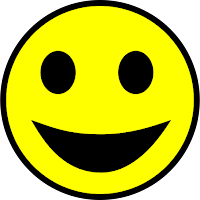 18 comments
Email ThisBlogThis!Share to TwitterShare to FacebookShare to Pinterest 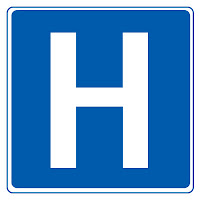