The Age Without Widsom (oh, I mean Wisdom)

I've been watching a lot of movies the past few days. Some really good ones, I hear. Four and a half stars even for some of them. One or two Academy Awards winners. 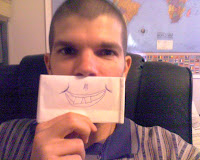 A lot of actors I really like. Most of the time I am open minded about movies. If they're horrible I'll often say I like them for art's sake, even. But these last couple days I have been the most bitter and cynical movie critic ever. I wasn't happy with any of the movies. They did nothing for me!!! And I want movies to do something for me!!! I found myself wishing I was getting my wisdom teeth pulled instead of having to sit and watch them. Eh, maybe that's just the drugs....

So my teeth were pulled on Thursday and the giant holes finally stopped bleeding by Saturday morning. Other than that everything's been just jolly. (dry heave) Actually, everything has been going better than I pessimistically anticipated. Still a lot of pain in my jaw, though. And because it hurts too much to smile I crafte d a nice piece of facial art to act as my interim-smile. All I do is flash it when I'm happy!

I have a photo of most of the pieces that used to be my four wisdom teeth. I guess one of them was at such an awkward angle that they basically had to cut it into a bunch of small pieces that weren't worth putting in my little to-go bag. :( Oh how I miss being smart.

I think I'll be okay to get back into my running shoes by the middle of the week. Hopefully Tuesday.