My first Boston Marathon experience was a major letdown. A drag. An abysmal weekend.

Never has a marathon been talked up as much as Boston has. Ever. I've been reading race reports and articles about Boston for years and it's always "Boston is great. The food is awesome. The fans are wonderful. The atmosphere is unbeatable."

But I felt like it was all this big joke on Scott, that everyone was an actor and I was the fool on hidden camera. So why was everyone else acting like they were having so much fun?

Boston's kinda of a bummer of a city with not much to do. Luckily my hotel room had cable, so I just sat around for three days watching TV.  And the food in Boston isn't anything to write home about. Sure, I had some chowder and fish'n'chips, a steak or two, moist burgers and crispy fries, a creme pie, a bagel sandwich, and a fruity-pebble ice-cream cone...but it just wasn't very good.

I went to a baseball game too, but the "ballpark" they have there is so old  and dirty and run down (built in 1912 or something -- I can't believe it's still standing) that I spent most of the time worrying if the roof just above home plate was going to collapse and ruin my mouth-watering, mustard-covered sausage and/or spill my ice-cold Boston lager, or if it was going to be the rotting wooden seats that would crumble underneath me.

And the race?  Overrated! [gasp]  WAY too many runners. And what's with all the smiles? This isn't fun, people. This is a marathon. It's serious business. And it's only about running at least one-second faster than I did last time. Too much annoying positive energy going around for me.

Too many hills on the course (why didn't anyone tell me about this part???).

And to the thousands and thousands of spectators who braved the cold morning to come out with orange slices and gummy bears only to yell and scream at me at the top of their lungs: please stop, I'm trying to concentrate on every single step because this is a marathon and it's important to me. "Go, Scott! Go, Scott! Go Go Go!" --- I'm trying to go, but only because you are so annoying that I don't want to stick around any longer.

I only have one thing to say about the girls of Wellesley: who the heck would want to run by and kiss all these young and attractive women in the middle of the run?

At the risk of starting to sound like I'm bashing Boston and its "special" marathon, and at the risk of sounding like a spoiled brat (I'm not, btw), I can't help but wonder if 26.2 miles is just a bit too long for this race. They way I see it, 25.5 would be a much better distance for Boston. But if Boston wants to be just like everyone else putting on a marathon nowadays, then I guess it just goes to show that they aren't as prestigious as they're making themselves out to be. "Hey, look at us, we're the Boston Marathon and we're making our race the exact same length as a million other races around the world. We're so special." I know a marathon is supposed to be hard and all, but I remember clearly thinking that mile 8 or 9 would have been the perfect spot to end the race. Seems to make a lot more sense. But I guess I'll just agree to disagree with Boston on this point.

Crossing the finish line was about as underwhelming a moment as I've ever had in my life. It's was, to be honest, a bit too dramatic of the organizers to have that sharp left turn onto Boylston where the finish line, which was seemingly towering over the entire city, suddenly comes into sight like the light at the end of a I've-dreamed-of-this-exact-moment-for-years tunnel.  Yawn.

To their credit though, the water at the finish line wasn't poisoned.

Sheesh, what a waste of a weekend.  That's 26.2 miles that I'll never be able to get back.

Scott
24 comments
Email ThisBlogThis!Share to TwitterShare to FacebookShare to Pinterest 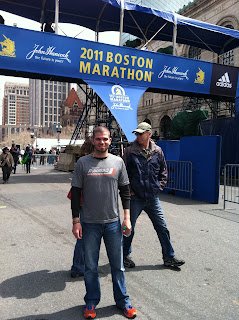 3 comments
Email ThisBlogThis!Share to TwitterShare to FacebookShare to Pinterest

I'll be participating in my first Boston Marathon on Monday, April 18. (Read my qualifying race report.)

I'll be treating my first Boston as a tourist. I'm carrying my camera and will attempt to take a photo of every square inch of the course.

I won't let time, pace, weather, sore legs, or a tired Achilles play even the smallest part in how much I enjoy these 26.2 miles. Every step will be a reminder of how grateful I am that I have the ability and means to participate in this prestigious event.

Live online streaming will be broadcast at www.universalsports.com.

Live web coverage is at www.baa.org.

During the race, I'll be broadcasting my current location live at http://runkeeper.com/user/ikeeprunning. (I love my iPhone.)

When I begin, you'll see a blinking red dot under my profile photo. Click on the dot to go to my live feed. From there you can watch my live stats and play around with the map view.
TEXT/EMAIL ALERTS

You will receive four text/email updates during the race.
10k
Half-Marathon
30k
Finish

Scott
18 comments
Email ThisBlogThis!Share to TwitterShare to FacebookShare to Pinterest

My legs still aren't fully recovered from Chile, but with some rest my Achilles is finally feeling much, much better. I'd say it's near 85% strength -- good enough to run, but not strong enough to push very hard.

Speaking of not pushing very hard -- there was a full schedule of local races this past weekend. Surprisingly, they weren't all at the same time.  So I thought I'd have a little fun and race 4 of them (within a 16-hour window) -- three 5k's and a 5-miler. My brother was in town visiting, and he joined me at all the races as photographer.

My goal for the 4 races was to not hurt myself, smile, and, if possible, run the three 5k's in exactly the same time without the aid of a watch.

I love it when I ask if dogs are allowed and they say, "Yes." Sadie really likes it too. She doesn't have as much fun being all leashed up on the sideline.  She also doesn't have much fun when the race begins with the bang of a gun. She's gun-shy and kinda freaked out, but after about 50 meters she was satisfied enough that we were running away from the gun to calm down a bit.

I love seeing smiles on the faces of people that I run past in the park -- they can see how happy Sadie and I both look when we're running. It's always a nice reminder that, above all else, I run for the enjoyment of running.

I was holding onto to second place for the first two miles, but then the third place guy made a surge past me. No matter how fun I am having while running a race, there's still a competitive side of me that wanted to match his surge and hold on to second place. But I stayed back and kept at my even pace, and I held on for a third place finish (1st age-group).

I've skipped this every year because I'm usually doing a long run on Saturday mornings, and because Sadie doesn't have much fun being around other dogs.  (They want to play and have fun, and she just wants to work.)

All of Saturday's races were in Pullman, which means the courses are hilly.  A lot of people showed up to register late, so they kept pushing the start time back. This had me a little worried, because I had to drive to a 9am race after this one. We started around 8:20, so I knew I needed to run fast. :)

When I moved into second place shortly after the start, someone yelled to me, "Are you going to try to beat Stephen?"

"That guy," she pointed to the guy who burst out into the lead. She then added, "He wins this race every year."

Well, I wasn't planning on being competitive, but now...

I stayed within a few seconds of him for about a mile and a half, but then Sadie had to take a restroom break and he was out of sight by the time we were back on the road.

It was a hilly course and my fatigued legs were working hard.  I finished in second place. I think this is the only the second time that another dog has crossed the finish line in front of Sadie.  She was a little disappointed, but I told her it was mostly her fault. :)

My brother and I rushed to the start of Race 3 just in time for registration -- only to hear them announce that the start would be pushed back to 9:30. So I had a little time to sit in the car and get warm.

This was another hilly course (it's hard to run in Pullman without running up or down several hills). My legs were getting a nice burn, and I was in third place after the first climb up to mile 1.  I moved into second on the first big downhill, but the guy in the lead had a big enough gap on me (80 meters?) that I had no intention of challenging him -- until I saw him look back just before mile 2; he was looking tired and was (I guessed) wondering if he'd be able to hold on to the lead.

Since I knew most of the last mile was a big hill, I thought I'd push just a tad to see how he did on the hill. He looked back again around mile 2.75 (near the top of the hill), and at that point I was about 10 feet behind him. He had nothing left in the tank, and I cruised to the finish line in first place.

The final race was the dessert race: 100% pure fun. (but still pretty hilly)

This was the event that our infant running club put on.  The idea was simple: run five 1-mile loops on a trail with great views of the Palouse; grab a card from a deck of cards after each loop; drink a beer at the end of a loop if you want to trade a card in at the end; best hand (not time) wins.

My legs were very tired at this point, so Sadie and I took it pretty easy. My cards weren't promising so I took advantage of the drink-a-beer-for-another-card option after loop 4. Running a mile with a stomach full of beer isn't as fun as it might sound. And, as it turned out, my beer gamble didn't pay off.


Running is fun, so keep running!

(BOSTON MARATHON IS IN ONE WEEK -- I'll post details in a couple days about how to follow me during the most famous of famous marathons.)
8 comments
Email ThisBlogThis!Share to TwitterShare to FacebookShare to Pinterest