River Run Dip and a Dam

What did the fish say when it swam into a wall?

My last run on the Snake River was a fight against the 102 degree heat. Today wasn't quite as hot, but it was still in the low 90's. Despite the heat I felt strong. I admit that I have a slight advantage because I run with Sadie. She's an excellent pacer, and there is probably a direct correlation to my run times and her energy level. Today she was running all over the place and I had to push myself to keep up with her - but maybe she was running so fast because the asphalt was so hot.

The path is three miles long, but today we ran past the end of the path another half-mile all the way to the Lower Granite Lock and Dam. This blog really isn't the place where 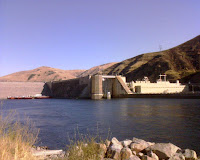 I want to get discuss my thoughts on the huge controversy over the dam along the Snake River. (Much of the controversy surrounds the ability - or inability - for native salmon to swim back upriver to their spawning grounds with these big concrete walls in their way.) I would like to mention, however, that from a strictly engineering standpoint I love dams. I think they're pretty frickin' awesome. And locks are almost cooler. The photo was taken from about a half-mile away.

Sadie loves this run almost as much as she loves being on mountain trails because here she can take a plunge into the cold river anytime she wishes. No comment on the rolling in the dead fish incident... Bad Sadie!

Another great thing about this run is that I have a clear view of the sky the entire time, which means I don't need to wear my watch because I can tell how long I've been just by the position of the sun. ;)

Oh, and it felt SO good to take a swim in the river after the run. Nice and cold. My ice bath without the ice - or bath.

I'm going to have a nice day off tomorrow. Sweet.

P.S. I was tagged by Marcy so I had to make this little me quiz. I had no choice...
Email ThisBlogThis!Share to TwitterShare to FacebookShare to Pinterest