I'm an official Bloomsday 2007 finisher. 12 kilometers (7.46 miles) of sunshine. It was a fun event. I don't think I'd want to run with a moving human mass every weekend, but it was so organized that 50,000 people only felt like about 46,000. Seriously, I was pleasantly surprised with how well the entire day went. Since I enjoy runs alone (with Sadie) on mountain trails I was thinking I may be turned off by a huge race like this. But I really enjoyed it. It was a wonderful atmosphere and everyone seemed so happy to be running.

We got there when it was cold and early and took a few photos (Jeanie came with me for inspiration and gear lugging). I also took my camera phone with me and snapped a few photos during the race. The photos on the course are a bit distorted from being shot while I was running (it seems I was running too fast for 21st century camera technology!)

As for the race itself - I felt good. I started out nice and easy and tried not to get caught up in the first mile adreniline sprint racing. Live music blared on dozens of corners and turns. People lined the streets and yards to cheer the runners on. That may have surprised me the most about the race. I didn't imagine there would be so many spectators pushing us on from the sidelines. And I think it worked. There was a lot of energy on the course.

I almost never run with a watch so I'm never quite sure what kind of pace I'm running. And I didn't run with a watch at this race. My goal at the start was to finish in less than 1-hour 10-minutes. For a 12k, that's about a 9:15 minute per mile. I thought that sounded doable, even never having seen this course before. And the main thing I've heard about the course was Doomsday Hill - a big climb between miles 4 and 5.

My official results are in (as reported on the Bloomsday webpage):

Click here to see an audio slideshow of Bloomsday 2007 (courtesy of spokesmanreview.com).

Here are some of our photos (click to enlarge): 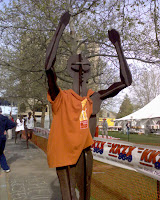 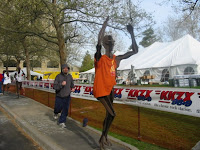 warming up with a "winner" 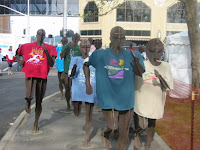 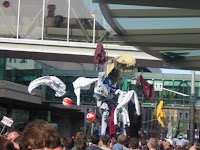 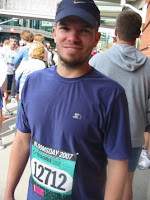 some random sexy sexy guy near the start 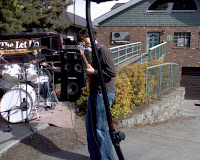 views from the race - "The Good" (live bands) 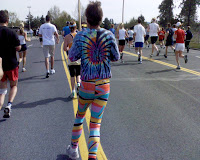 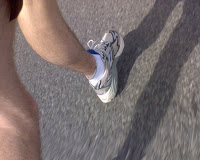 happy feet (not so happy later in the race) 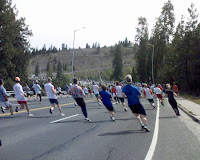 this was a vulture waiting at the top of Doomsday Hill 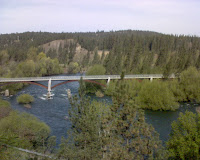 view from the course 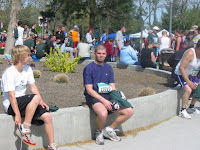 there's that sexy sexy guy again after the race ended
Email ThisBlogThis!Share to TwitterShare to FacebookShare to Pinterest