The Kootenai River Run is held in Bonners Ferry, Idaho - the northern reaches of the state. I traveled with fellow blogger Jen, her husband Shane, their 2 year old human boy, and their 3 1/2 month old English Mastiff (who is already nearly 40 lbs!). The 4am start to my morning threw off all my normal morning "routines" and I was a bit nervous that race time might be rather unpleasant. The sun is already out that early and the three hour drive to Bonners Ferry was beautiful. It is not uncommon to drive by moose that early in the morning, but today we had no sitings.

We got there with plenty of time to check in, stretch, and play on the playground. My last race was the Bloomsday 12k in Spokane, WA which has over 40,000 participants easily. It was clear on arrival that this race would be just a bit smaller. :) Jen and I were running our first 10ks and Shane was on toddler/mastiff duty. We were a little nervous while checking in when we asked the ladies at the check-in table where the starting location was and they looked at each other hoping the other one knew. They pointed in a few directions before calling someone else over who seemed sure it was "beneath that large willow tree over there."

There was also a 5k that started along with the 10k. At the starting line (yep, under that willow tree) there probably weren't more than 200 runners. Jen and I laughed that maybe we would be able to take a ribbon in our age group. "Ha ha ha." The weather was mildly cool with a stiff breeze.

I knew it, everyone started out like rockets. If there is one thing I've learned about my couple lifetime races it's not to get caught up in the beginning adrenaline filled sprint-like pace. So I hung back a bit and let whoever wanted to to fly by me.

The first mile was slightly uphill and I came in at around 8-min 10-sec, about what I was hoping for. My goal was to break an 8 minute mile for the entire - so around 48 minutes. After about a mile and a half the course split between the 5k and the 10k. I think I was a little surprised to see so many people making the sharp left for the 5k. I notice that not many people were actually ahead of me on the 10k course. Hmmm, this could be interesting. My second mile was mostly downhill with a slight tailwind and I ran it around 7-min 05-sec! Slow down, slow down. For the next half mile I couldn't stop looking at my watch even though the seconds ticking off don't mean anything unless I have a mileage marker. I was concerned I was going too fast and the watch was becoming a bit of a distraction. So I made the decision not to check it again, and I didn't until near the end. The turnaround point was absolutely beautiful. Yellow canola fields blowing in the wind. It crossed my mind to take a walk break just to make the scenery last. But I didn't, because at the turnaround point there were less than 10 people in front of me!

The last half of the race was mostly uphill and into what seemed like a very stiff wind. I think my hill running in Pullman paid off because I was able to catch and pass three runners on the uphills. One of the runners was this guy who ran the entire race in the middle of the road and wouldn't move to either side when cars were coming by. I couldn't help but laugh as some of the drivers displayed their knowledge of sign language, but he was not fazed at all. The road was his.

I'll be honest, I was feeling the adrenaline rush at this point. 2 more miles! Less than 1 miles! 1 more mile! The last bit was downhill and I felt like I had something left so I pushed it a bit more. I felt good going through the finish line. It wasn't until nearly a minute later that I remember to look down at my watch to see what my time was. So I had to wait until the names were posted to see my official time. And it was pretty exciting to know I finished near the front and had a great chance of actually placing in my age group.

The times were posted and I placed third in my age group! Sure it was a small race, but how cool is that? I forgot to look at my overall finish but if I counted correctly on the run it was maybe 7th or 8th place. My time was 45-min 44-sec. A 7:22 pace. So I'm very happy with that. My pace at the Bloomsday 12k was 7:55, so I think that was a nice improvement over a month and a half.

Jen came in a little behind me and ended up placing 2nd in her age group. Congratulations Jen! So the funny ha ha joke at the beginning actually came true. "Ha ha ha." 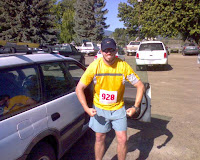 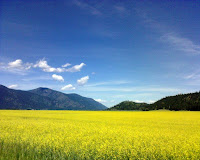 Canola field near turnaround point
(yes, this is a real photo) 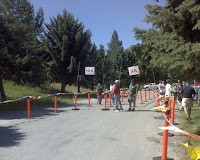 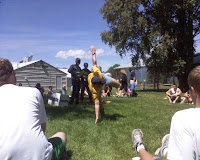 And I should have received some kind of award for
my ribbon acceptance cartwheel, don't you think? :) 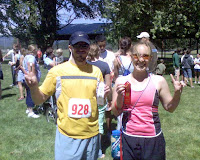 Yes, a fun race and an all-around great day.