On the trail again 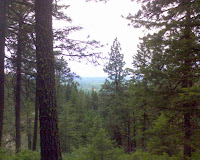 I'm training for a road marathon, something I feel I need to do - and really want to do! But when I get on those trails...man, I don't ever want to run on asphalt or concrete again.

According to my training schedule, today was supposed to be a 3 miler but I felt I could bend that a little. And I needed to get to the trails. NEEDED TO. Getting out on the trails sure breathes new life into my mental runnning engine thingy. Not that I've needed it, though. It's just nice, like a mini-vacation.

So Sadie and I headed out to our old reliable - Headwaters Loop. 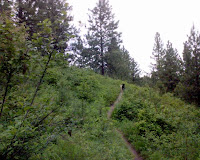 We got there early and had the trail to ourselves (it gets semi-busy during weekend afternoons). The air was cool and my legs felt good. The loop is basically a climb to the mid-point and then back down. I wanted to run the entire thing today but decided to take a couple walk breaks on the up part to save a little for my long run tomorrow. Sadie doesn't like it when I walk. She keeps looking back like "Uh, hello? I thought you said we were going on a RUN today." I felt good the entire way and Sadie found every water hole to plop down in. The creeks were running pretty low and I'm guessing that soon I'll have to start carrying water for Sadie, too. 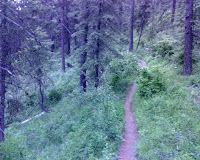 The first three photos are from today's run. Everything is so green and many parts of the trail are bordering on being overgrown by the underbrush. But that never lasts long with the dry summers we have here.

I'm still on the lookout for an ultra-small camera that I can carry with me. Right now I'm carrying my camera phone and it has been fine so far but it doesn't have the best image quality or a zoom feature, which would be really nice on these trail runs. I'm not desperate for anything, just interested.

with Sadie and Shasta. That's our cat Damian. Sadie sure loves him. If he's in the house Sadie has to make sure he's doing okay. And it's so funny how when Damian is meowing on the front porch and the door is closed Sadie will ring her "I've got to go to the bathroom" bell to let us know he needs in. Our other cat doesn't get along with the pups quite as well...