The train station from Beaverton is empty on a Sunday morning before six o'clock. Forecast called for rain but it was still too dark to see the sky.

Saturday night I stayed with some friends I hadn't seen in awhile. They live a few hundred yards away from the light rail stop so we decided to jump on that to head to the race. Start time was 7:00am. So catch the train time was much earlier. And wakie wake time was much, much earlier. I don't like getting up early. 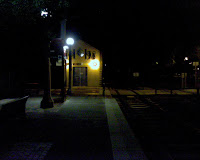 Deserted station when the
little hand is on the five. 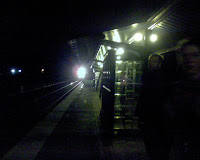 The train was scattered with tired people in running shoes. An automated recording came over the loudspeaker and said the priority seating section is designated for the elderly and those with a disability. I asked the guy next to me if voluntarily wanting to run 26.2 miles would be grounds to claim a disability and he laughed that this was his seventeenth marathon (Portland Marathon eleven times). He asked about me and I told him this was my first marathon. He told me good luck and added that the real crazy ones, the ones with the real disability, are those who do 26 miles as a training run for 50 or 100 mile races. I was embarrassed to tell him that my first marathon actually was part of my 50 mile race training.

I pulled out my course map and Mr. Seventeen pointed to all the places where he's seen "real good runners" pass out and have to be pulled off the road by the medical crew. Was he trying to scare me?

We arrived downtown and I had no sense of direction in the dark. I had hopes of meeting up with a great group of runners near the starting line (Michelle, Rob, Jenny and other Maniacs) but there was just enough time for me to use the little boys room and make my way to the starting line. I did have the wonderful opportunity to meet and chat with Michelle, Rob, and Eric at the expo Saturday afternoon and I was invited to a great spaghetti dinner at Jenny's parent's house. It was just me and a bunch of Marathon Maniacs. You should see their secret handshakes and the funny dances they have to do when they meet up with each other. It was a crazy encounter with a little known slice of the running underworld. Believe me, they don't call them Maniacs just because they love to run marathons.

I did see Jen and her husband Shane before the start. Jen was running her first marathon too and she did great!

Still dark just before seven o'clock. Why are we starting so early? 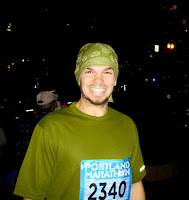 Squeeze squeeze squeeze into the starting area. I hadt been that claustrophobic since I ran Bloomsday in May. The guy in front of me kept bending over to stretch his hamstrings and it created a few uncomfortable situations for me. Everyone was squeezed together pretty tight, so there's really not much room to get out of someone's way if they wanted to bend over and stretch - but this guy was determined to stretch those legs a little more even though he had 26.2 miles to get them nice and loose. I did give him my phone number in case he wanted to meet somewhere properly after the race. 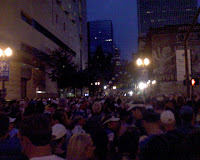 "Let's get this started NOW.
It's too early for any of us to
have taken a shower this morning
and Mr. Boston Here I Come
standing in front of me
smells like, well, Boston." 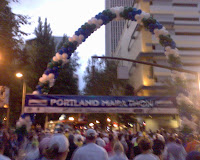 No watch, no Garmin, no expectations. Right?

I knew my legs were probably still going to be tired from last weekend's run, so I didn't want to have any serious goal set that I would be disappointed not getting. The hope was to run strong without killing myself and to have as much fun as a person can have on a 26.2 mile run. My outside goal was to shoot for a sub-4hr.

I started out nice and easy and then slowed down a bit more. There was a little uphill section about a mile in and I walked it. Walking breaks were something I definitely wanted to keep doing. Because I didn't wear a watch I wasn't taking regularly scheduled breaks. Instead I tried to use every other water station (near the beginning) and then every water station (near the end) as a good place to relax and take a little walk while I get a drink.

Going through mile five the timekeeper yelled out 64 minutes - 27 seconds. I did the (not so) quick math and realized I was going way below a 4 hr pace. Then I realized she yelled out 46, not 64. (I don't think I'm lexdysic.) 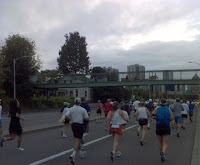 Notice the musical guests
on the overpass. Entertainment
was popping out of every corner.

Nearing the eight mile mark I caught up with the 4hr pace group. I was feeling pretty good at this point. Tired legs, but I had gotten into a nice rhythm and was holding a nice pace. I thought I could handle easing by this group. If a faster pace was too much then I'd be fine dropping back and hanging with the 4hr group as long as I could. Well, just before mile ten I caught up with the 3hr50min pace group. These groups are led by a pacer carrying a balloon marked with the target time. I ran with this group for a bit then decided I'd stick with them as long as I could. The longer I stayed with them the better chance I had of finishing below 4hr even if I crashed and burned at the end.

I carry my cell phone with me on most of my runs. Primarily to take photos, but also to check stock market updates. My dad knows I carry my phone with me and he knew I was running the Portland Marathon and he knew I would answer the phone if he called. So around mile eleven the phone rings and I know it's my dad so I pick it up and have a little chat with him.

"Oh, I thought you'd be to the halfway point by now," he says.

"How are you feeling?"

"So, what shoes did you decide to wear today?"

"I went with ol' faithful."

"Yeah, that's what I figured. How's the course? Is it raining?"

"Not a drop. Nice course despite all the pavement."

"Well, Dad. I have to get back to my marathon. I'll call you later."

"What did he always say?"

"He said the most important thing you can do during your marathon is --BEEP BEEP-- oops, got another call coming in. I better take this. Good luck and give me a call when you're done. Bye."

I'm sure a runner or two near me was annoyed that I was talking on my phone. But if they knew it was my dad and that it was my dad who got me into a pair of running shoes in the first place and that it is my dad that I'm training to run a 50 mile race with then I think they would understand. Except for that WAY too serious lady with the buzz cut running by me shouting "Gatorade! Gatorade! GATORADE!" to the poor guy running on the sidewalk next to her in a pair of jeans with a small pack full of little Gatorade bottles.

So, I'm sticking with the 3:50 group pretty well. Walk breaks at the water stations and I fall behind a little ways. Go catch up with the pacer then fall back at the next water station.

Then the "hill." On the map it was very insignificant. And I especially wasn't worried about it because it was a measly 100 ft or so climb. But for some reason when I reached the hill it morphed into a near vertical climb. It was around mile seventeen or so and I realized that I had probably been running at a faster pace then I should have been up to that point because the hill just knocked me on my butt. The hill then climbed up to a big bridge (St. John's) that crossed over the river. 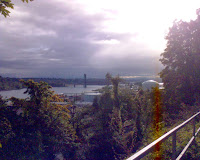 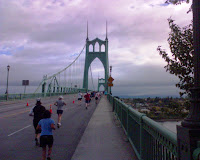 Heading over the St. John's Bridge near mile 18 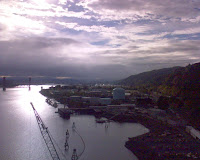 Downtown Portland (the start)
is barely visible on the horizon 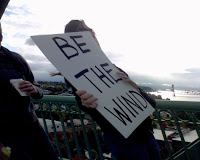 Spectators on the bridge

At about mile twenty or so I caught back up with the 3:50 group. I was hurting pretty bad at this point but was trying to focus on something else - like my form or my cool new shirt or what's up with that extra point two at the end of a marathon.

At the water stations they were handing out little packets of some sort of honey concoction in a GU-like packet. I figured it wouldn't hurt to try it, right? Wrong. Let's just say that when I got home I went to my pantry and through out all my Honey Nut Cheerios. No more honey anything for a long time. Wow.

People were dropping like flies after mile twenty. Laying on sidewalks, puking in bushes, convulsing in the streets, taking bathroom breaks on the side of the street that you would normally want to do behind a locked door. Ah, you have to love long distance running.

Around mile twenty-three or so I was lagging behind the 3:50 group and just let them go. I was hurting bad now and just wanted to finish on my own and not in an ambulance. An unofficial aid station was giving out cups of beer instead of water and I thought I'd stop by to make a few new friends. They urged me to keep going because I was so close to the end. 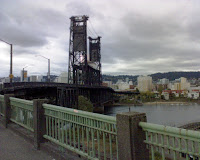 Mile 25 is on the other side of the bridge

Over the bridge and back into downtown I was surprised and overwhelmed at the support from all the spectators. People were lining the streets and cheering everyone on. This was a great feeling and gave me enough of a boost to run in the rest of the way. 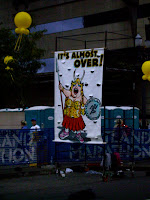 Can you hear her singing?

Make a quick right then a quick left and there's the finish line. My name came over the loudspeaker and I finished. A Portland Marathon finisher. 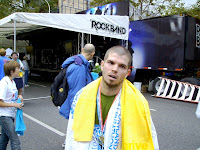 (After photo)
Where's that smile from the start?

I was very happy with the entire weekend. Great friends, great food, great city, great weather, great event, great day to run. The only bad thing about the whole weekend was that after the race I had to drive six hours home. Wow that was a long, long ride.

I'm still tired and a little sleep deprived. This week I'll surely post some reflections on the race once I get some time to think about it.

Congratulations to all the Portland finishers! And my heart goes out to all the Chicago marathoners - those that finished and especially all those who weren't able to. What a horrible experience that must have been.

I'll leave you with a photo of the train ride back to Beaverton yesterday after the race. 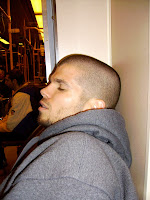