Man I've been tired this week. I don't know if it's a lack of good sleep or if i 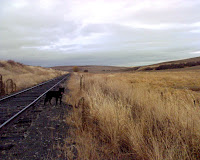 t's an accumulation of my miles adding up. It probably has a lot to do with the super super super busy week at work. My mind is numb. Maybe it's because I've been a vegetarian this week. Maybe more on that in a future post - in the unlikely event that it lasts. I know that now is probably not a good time to start radical dietary changes... Whatever it is, I've been low on energy.

Three weeks until JFK! I have a big weekend planned mileage wise. I'll see how my energy levels are and take it from there. For once I want to go into a race nice and rested.
The taper weeks are going to be a beautiful welcome.

I woke up this morning to a brisk 19 degrees. The season's first scrape the ice off the windshield/motorcycle 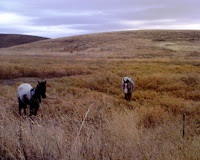 morning. Only a handful of rides left before ice takes over the streets. Wasn't it just a month or so ago that I was running in 102 degrees?

There have been a couple decent runs so far this week. My main goal at this point is to stay injury free. Easy runs, generous walk breaks - just get the miles in. Shasta joined us yesterday for six miles. That ties her PR for distance. I'll never get tired of the looks I get when people see Shasta running along with me and Sadie. She has so much fun...most of the time.

I've been doing quite a few runs along the side of a rail line lately. It's virtually an unused track and the "path" along side is very 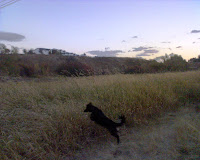 rocky. Running on the rocks is my attempt to train for JFK's rocky Appalachian Trail portion of the race. Sadie met some horses and made friends. But she doesn't care about the horses as much as she cares about pouncing into the grass to stir up a rabbit or grouse. She's the best running partner a guy could ask for. She licks my wounds and urges me to keep going. I still haven't told her I'm going on an epic 50 mile race without her...

Jeanie's doing well. Things seem a bit more manageable after having a week to look at things.

A couple big runs this weekend and then taper. I'll try to grab a few photos along the way.