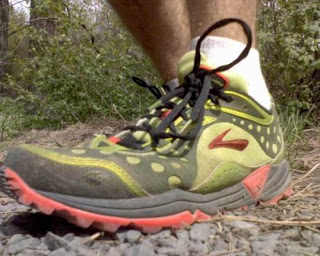 No running compares to trail running. I have to say that sometimes when I'm running on the roads or bike paths I feel like I'm just exercising. But when I'm out on the trails there is something different. No cars. No concrete. No intersections. No need for leashes. It is nice to have such a dedicated running partner as Sadie and I love seeing her run off the leash.

But today's run may not have happened/may not have ended so wonderfully if I didn't make a quick decision...

I went driving to another part of Moscow Mountain looking for a trailhead that accesses trails I've never been on. The directions I got were a bit shady:

turn right on this road that says no trespassing but don't worry about that because it's okay and then up a ways on the left you'll see a log just past a bird sitting on a limb (don't worry, this is the bird's favorite place to sit so it will probably be there) - go past the log about fifteen seconds and then move away some brush. you'll notice what looks like the skeletal remains of some very large animal that seems too big to have died in such a violent way, but don't worry, it's already dead. plug your nose and continue rather blindly until there are enough leaves crunching under your feet to make it sounds like you're walking on a sheet of leaves. then simply turn right and you'll see the trail to this secluded runner's paradise.

and roads aren't really marked on this part of Moscow Mountain. But I continued until I thought I was in the general area and I stopped next to a couple other cars that I pulled off on the side of the road. Sure enough, there was a no trespassing sign and a path leading up - so I let Sadie out and headed up. 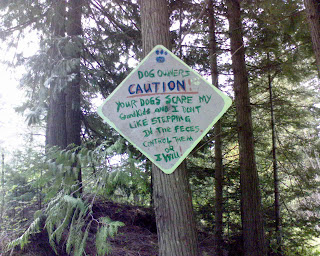 (click to enlarge and read)
There was something that didn't sit right with me about this sign. Maybe it's because I re-watched the movie "Deliverance" recently, but it just seemed like the guy who wrote this sign was a bit...off - just look at the color combinations. And I think he was lying about something. Either he didn't really have any grandchildren or he really did like stepping in dog feces. Either way, I thought it would be best if we headed back to the car (I think it is definitely because I watched "Deliverance" so recently.)

I headed back to the other side of the mountain to our regular trails and had a wonderfully safe run on the Headwaters Loop. And Sadie was a happy pup too. 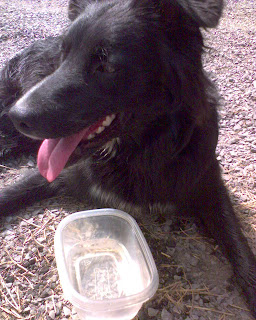