Not quite the 50 miles I was shooting for before the day began, but it was very 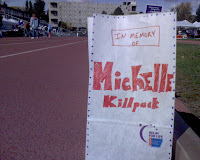 , very fulfilling to even reach 40.

Before I get started I just wanted to thank everyone for their kind words on my previous post. Also, many of these people don't read my blog, but a huge thanks (with a big hug attached) to those whose online donations helped support the event. Some of these donations were from people I've never met and to me this is amazing. You all rock! I hope everyone understands how much your thoughts and support mean to me.

As I mentioned on my previous post, I was not treating this Relay for Life event as a race. My goal was to honor the memory of my Aunt Michelle with an act of life that resembled the passion she lived with. Although my 50 mile goal turned out to be allusive, I am confident that the 40 miles I did cover accomplished what I set out to do, and then some.

The opening ceremony was highlighted by a very moving ten or fifteen minutes when all cancer survivors in the crowd were asked to come on stage to introduce themselves and briefly describe their story.

"My name is Karen. I was diagnosed with breast cancer six years ago when I was 51. Right now my body is free of cancer."
"Donald. Prostate cancer ten years ago. All clear."

"Suzie. Diagnosed with Hodgkin's two years ago when I was 19. Still alive and loving every minute of it."

"Rebecca. 48 years old. Have battled three different cancers. It keeps fighting, but I'm not going to let it beat me!"

These survivors are truly an inspiration. After they all introduced themselves the Relay kicked off with a lap by the survivors led by a local bagpiper. When those bagpipes filled with air and the music squeezed out of it in the sad way it does, it seemed no one could help but think about those who weren't with us anymore.

I was excited about the turnout for the event. There were a lot of people out and with music blaring and people bouncing around the track it was a party atmosphere. I ran when I could and spent a lot of time walking laps with my friends and teammates who signed up for hour long blocks to walk throughout the night. The spots I had alone I tried to run as much as I could. My goal was to reach 30 miles by midnight, which would give me eight hours to cover the final twenty.

When the sun went down the music and lights were shut off for the luminaria ceremony. This was pretty neat. Lined around the entire track were white paper bags submitted by participants or community members with the names of loved ones passed on or loved ones currently battling cancer. These bags were filled with candles (well, glow sticks actually, the Pullman Fire Department wouldn't allow candles...). Then all the names on the bags were read over the loudspeaker. It probably took nearly thirty minutes to read all the names. To me, this was the highlight of the event. On one hand, it was comforting to know that no one affected by cancer is alone. People want to help each other. On the other hand, it was incredibly sobering to get a glimpse at just how awful and far reaching this disease is. It affects may too many of us.

When Michelle's name was read over the loudspeaker I knew that I was the only one in the stadium who recognized it. At that moment I realized that it didn't matter how many miles I was going to run. Her name, her memory, not forgetting. This is the point, right? I felt that just by getting her name read off was a victory.

Her name still resonates in the air - her memory in physical form.

I did reach 30 miles by midnight. That was about the time that I realized my 50 mile goal was not going to happen. I feel guilty talking about the physical pain I was going through in an event honoring the memory of those who have passed away and who would give anything to feel the pain I was feeling. So I'll just say that I wanted to push myself physically in the celebration of the life Michelle was so passionate about. I did this. And covering those 10 miles in the last eight hours, though it may not seem like much, was something I'm proud of. The evening was a success.

Thank you all again! And thanks to all my teammates who helped out! 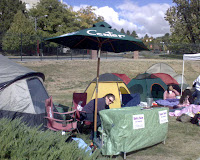 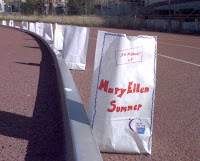 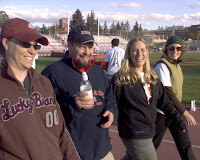 Walking the track with friends 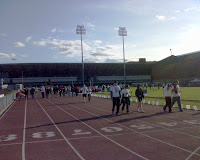 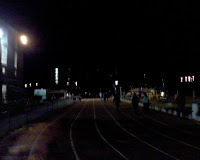