Just when we started getting in our groove... 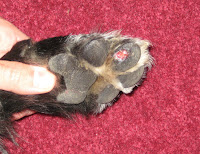 On our short run yesterday morning, poor sweet Sadie ran over something and cut her paw pretty bad. We were about two miles away from the car and she was bleeding pretty bad. But the border collie in her let her tough it out until we got home. I cleaned it up and there's a fairly ugly gash. She's been keeping weight off it since - hopping around on three legs like a poor unfortunate soul.

I don't think it's so bad that she needs a visit to the vet. I'll keep an eye on it to see how it looks and how she's feeling. Her heat blisters last summer were a bit worse than this and she was out of commission for about two weeks. Hopefully this time she won't be out as long. 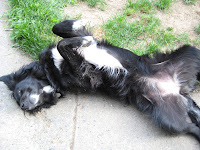 I put in over 40 miles last week, my highest non-race week total since October. My knee is feeling stronger and stronger. Temperatures are getting higher and higher. My Iceland trip is getting closer and closer. Man, I hope Sadie gets better fast.

The top photo is her paw this evening.

The second photo is Sadie in a good mood rolling around today.

In the bottom photo she is taking a nice little break on our 15+ mile trail run Saturday. I suspect she'll get herself better so she 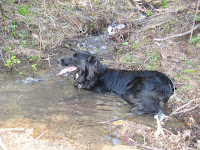