It's such a fun event. The race is only part of the fun-filled day. There are generally over 50,000 people lined up at the start, which makes it one of the biggest races in the country. There are dozens of live bands playing along the course. There's a hill called Doomsday. People are in costumes, and everyone is having a grand time. And there is always the after race parties and meeting up with friends. This year two of our friends participated for the first time.

This year has been another fun year so far. I've been getting in some great training as I prepare for my big race in Scotland at the end of June (95-mile West Highland Way). So the last couple months have been focused mostly on big miles in the mountains, and not on a fast, short road race like Bloomsday.  But, as it turned out, all the hill work I've been doing has translated into some decent fitness.

The day before Bloomsday a couple friends and I hit Moscow Mt. for a 4+ hr, 24-mile trail run (we're all training for big trail ultras). I anticipated slow, heavy legs for Bloomsday, and they sure felt that way when I woke up.

I went out easy with no intentions on trying to PR (2011's 47:25 was my best time). I just wanted to go out and enjoy the event. This doesn't mean I was intent on "jogging" the course. I planned to run as fast I could on the tired legs for sure, I just didn't have any specific plans to shoot for a PR. I thought I would probably be in the 48-49 range.

My legs were feeling quite heavy for the first mile like I anticipated, but then they started loosening up during the first big downhill. And when the first climb came they were feeling surprisingly strong, so I picked up the pace. By the time I hit Doomsday Hill at mile 5 I was feeling very good, and obviously better than I had any previous years.

I powered up Doomsday (while high-fiving the mascots and vulture) and was still feeling good (and having fun), so I cranked it up as much as I could. I noticed that I was now passing a lot of people who looked like they were running decently fast themselves, so I started wondering what my time might be and whether or not I actually might have a shot to snag a PR. I wasn't wearing a watch so had no idea what my splits had been up to this point, but I knew I was now running faster than I had run the previous year; I just didn't know if the easy-paced first couple miles may have been too slow.

When I made the last turn toward the finish line, a two-block downhill sprint, I could finally see the clock and I was pleasantly surprised to see that I was going to smash my PR. I crossed the finish line nearly two minutes faster than last year in 45:32 (results). I know I am faster this year than I was last year, and I knew that I would have blown away my PR if I hadn't run gone for a big trail run the day before, but it was a pleasant surprise to still get that time on what I thought were going to be tired legs.

A beer tent, sun, music, jerk chicken, and blue-cheese sausage made for a fun after-race party too. Bloomsday's a blast. 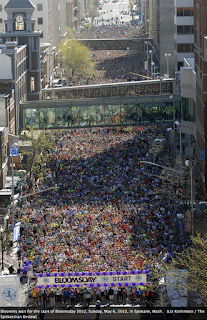 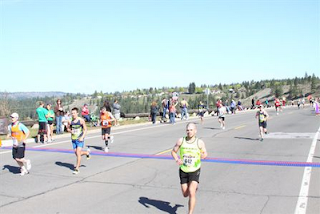 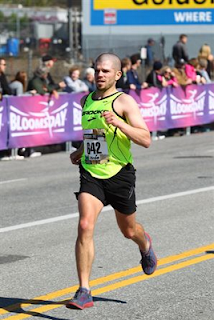 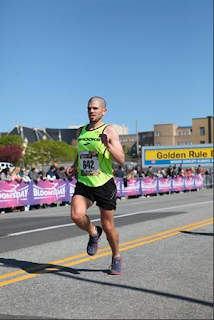 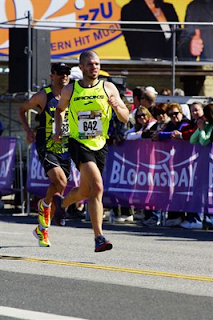 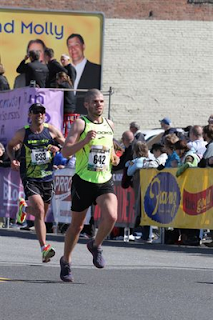 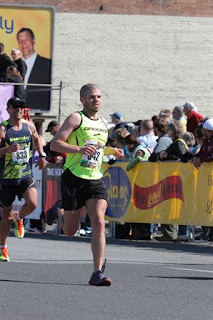 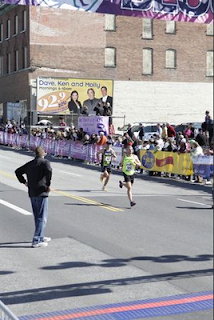 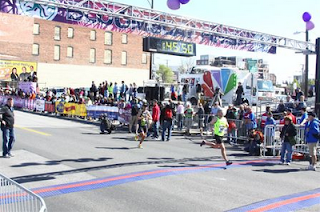 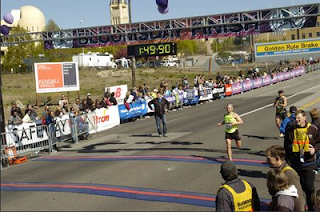