THE CHALLENGE
Run across the entire state of Idaho in a single day - from Montana to Washington.  I found a 93 mile route that utilized trails and paved bike paths.  Only about two miles of the course shared the road with motor vehicles.

My friend Annie was my awesome crew for the day.  Sadie was my awesome running companion.  We got up early and made it to Lookout Pass on the Montana-Idaho border for a 4 a.m. start.  Temps were in the upper 30's - not what I expected in August, but on a long run like this, I'll take the cool over the hot any day. 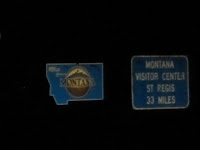 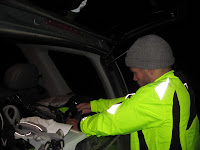 Gear check
For the first ten miles I followed the little beam of light from my headlamp down the west side of Lookout Pass on a quiet gravel road through mountain forest.  Sadie stayed ahead of me and out of my headlamp range for most of this section.  Every once in a while she'd stop and turn around to make sure I was still coming, and her little eyes reflected red from headlamp -- a bit spooky no matter how many times I saw her.  I expected to see other eyes reflecting at me when I glanced  into the woods, but I don't think any of the wildlife were awake this early in the morning.

The course was downhill for the first 30 miles, with over a 1,500 foot loss in the first 11.5.  I knew I had to start slow and fight the temptation to run too fast.  I made an effort to take it easy and even walked several times during the first section, but I still hit the first checkpoint (11.5 miles) under a 9 min/mil pace.  "I feel great! This is going to be easy!"

The sun popped up and I dropped off my cold weather gear.  Temps were forecast to be in the 70's, so I had a couple short-sleeved shirts ready, but it never did get warm enough for me to ditch my long-sleeved shirt.

I kept an easy pace and walked for a few minutes every couple of miles.  Save the legs...save the legs...  There was a pretty little river running parallel to the trail, and usually I'd stop and let Sadie jump in for a drink and cool-down, but every mile or so there was a sign warning me to KEEP OUT - MINE WASTE.  This stretch of the run was littered with historic mining towns.

I dropped Sadie off with Annie at mile 28.5.  She was not pleased to see me running off without her, but I wanted her to run more with me so I thought this was a good time to give her a break.

I made it to the mile 31 checkpoint in 5:14, which is a new 50k PR for me.  That wasn't too surprising, considering that my other 50k's were through mountain trails, and this stretch was smooth and downhill the entire way.  I didn't feel like I was pushing too hard, but having never run 93 miles before, I honestly had no idea what to expect during the last 1/3 of the course.  My legs felt fresher at 50k than they have at the same point of my other 50-milers, so I kept going at a comfortable pace.

By mile 40 I was very tired, but more mentally than physically, I think.  This was about the time I started doing the "I've gone this far, but I still have X miles to go" game.  That's not a great game to play.  I took a long checkpoint break, ate lunch (pb&j/SunChips), and reminded myself that this wasn't meant to be easy, that it's not the same if it's easy. 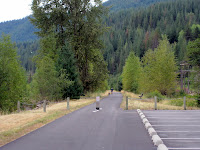 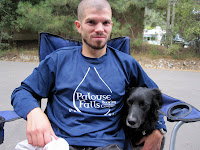 Lunch and Sadie snuggles at mile 40

Sadie joined me again at mile 40 for an 8.5 mile section.  Around this point, word of my challenge was starting to spread through many of the cyclists cruising by and I'd get a "Good luck, Scott!" or "You're looking strong!" or "Keep it up!" -- it seems Annie was making friends at the trailheads she was waiting for me at.

Just before I reached the 50.5 mile checkpoint a sharp pain shot through the outside of my left foot and it brought my running to a very slow walk.  "Shit!"  It must have taken me 20 minutes to walk half a mile.  I'm not sure what it was, but it hurt pretty bad.  I went to a picnic table and laid down on the bench.  I've been pretty lucky with injuries throughout my running career, and I've never had problems during an event.  This was the first time the thought crossed my mind that I might not make it to Washington, that I might have to "drop" from a race for the first time.  I knew that if the pain kept up that there was no way I could reasonably keep going (but then again, running 93 miles isn't that reasonable to begin with, is it).  Annie gave it a quick rub, and I switched shoes for psychological reasons more than any other.  The next section was 5.5 miles.

I thought I'd walk a mile to test the pain, and it still hurt.  But this was about the time this image kept popping into my head.  Suddenly my foot pain seemed pretty insignificant.  I started running again and the foot pain never entered my thoughts for the rest of the day. 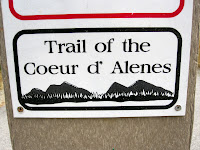 72 miles of my route was on this trail 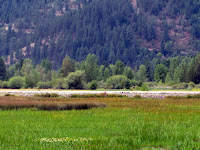 I cruised into the next checkpoint, refueled, and headed back to the trail.  This section of the route was one of the most scenic, but I had given my camera to Annie a few stops before because I was becoming too tired to take photos.  It was getting later in the day and most of the bikers had already headed back to the major trailheads.  I had Idaho to myself.

My body was hurting, but it was the long-distance fatigue that I expected at 60 miles.  I'd run this far before and knew I'd be very tired.  I passed the 100k mark and laughed when I thought to myself, "Only 50k to go."  Only 31 miles to go. Only several more hours to go.  Only significantly more fatigue to go.  Only a lot of unknowns to go.  Only a 1/3 of the Idaho Panhandle to go.

I stopped for a sandwich and opted to drink my celebratory beer, not because I was celebrating anything, but because a beer sounded much better than some more water or Gatorade.  It tasted great. 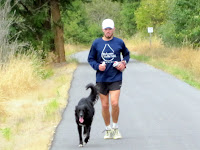 Sadie's pretty amazing - she ran with me for 47 miles 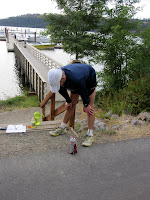 Looking intently at the ground, wondering if I have the energy to get myself to it 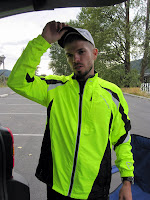 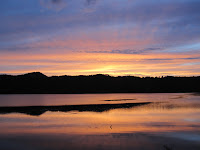 Sunset over Coeur d'Alene Lake
The sun set as I reached the 73.5 mile checkpoint.  From this point on I was in a world I'd never been to before.  The fatigue I was feeling was greater than I've ever felt, but I knew it would be like that.  I expected that much.  What I wasn't expecting were the mental games that were being played out in my head.  I passed the point of "If I quit now, I know no one will think any less of me" - I've been there before, but I'm always quick to respond with a "but I'll keep going for myself, because I know I can keep going and I'd think less of me."

What was stuck in my head (very clearly, I might add) when I sat at the mile 73.5 checkpoint with a bad case of the shivers, chapped skin, and blisters popping on my feet was "If I quit now, I will not think any less of myself."  I'd been farther than I'd ever been.  I'd just run almost the entire distance across Idaho.  I'd gone through more pain and fatigue than I'd ever experienced. This wasn't a "real" race; there's no medal or ribbon or certificate waiting for me at the end.  So why go on?  What would be wrong with quitting?

I wasn't expecting this, and it scared me a little because I didn't know how to battle these seemingly sound reasons to quit.  But I knew I had to fight back - I'm not sure why I had to fight back; I just knew I did.  Looking back at this moment when I was sitting in my camp chair with the shivers, with every reason to quit and no reason to go on, I'm not sure I remember why I got up from that chair to keep going.  But I did get up, but not without the help of Annie, who had to physically help me up from the chair.  I walked to the trail, put on my gloves, turned on my headlamp, and started walking into the dark.

Something happened during the next 7.5 miles.  I'm not sure I can explain it.  I think it may just be something that I have to try to understand on my own, and maybe I'll never understand.

I reached mile 81 and the end of the Trail of the Coeur d'Alenes.  Now it was through the little town of Plummer, and a not-so-fun one mile stretch along a highway (but it was late and only a few cars passed along) before meeting up with the gravel trail that would bring me across the border.

I knew I had only 12 miles to go, and I knew these would be the most physically difficult of my life.  Something happened a few miles back mentally and I felt okay in that department, but I still had to move one foot in front of the other, and any moving hurt, but I knew I was going to get Washington.

Sadie joined me with 10 miles left and we climbed a bit up into the rolling wheat fields of the Palouse.  It was a surreal night.  The moon was bright and I was able to turn off my headlamp for most of the last 10 miles.  The landscape was quiet and the coyote calls could be hear for miles.  I was walking most of this section, and only trying to run on smooth downhill stretches (which weren't many).

At one point Sadie stopped on the trail and stared at something in the tree next to us.  I turned my headlamp to what she was looking at and there was a huge porcupine sitting in the tree looking back at us.  Twice I noticed that I was starting to doze off while I was walking -- that was an interesting experience.  And when for a brief moment I saw a mythical lioness emerge from the sea onto a sunny beach, I knew it was time for me to get to the state line and get some sleep.

I crested a hill and saw the car's headlights parked ahead of me: Washington!  And after 21 hours and 50 minutes, in an anti-climactic finish that immediately revalued the history of anti-climactic finishes, I took my the last step across the state of Idaho, took a photo by the sign proclaiming the trail under control of Washington State Parks, and got in the car to head home.  Done. 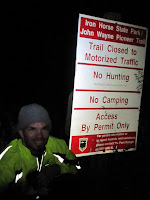 From Montana to Washington 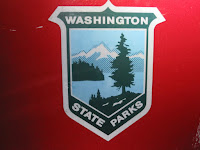 Thanks to Annie.  I couldn't have done it without her.  Thanks to Melanie and my dad and everyone's support.

I'm continually amazing at what running can teach me.

Now some rest, and then the next big adventure, whatever that may be.