Ultramarathon man (hint: it's me)

I was featured on the front page of my local paper today.  Here's the full article (online version here): 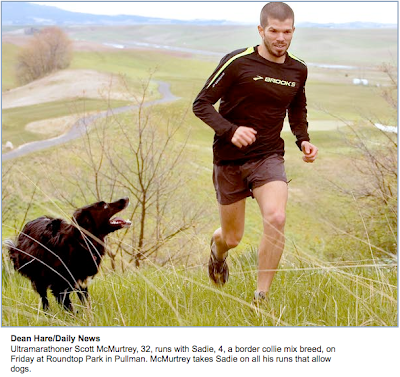 He and his border collie mix, Sadie, might get five or six miles in on a weekday after work.

They love to spend weekends running some of the 50 miles of trails on Moscow Mountain.

Once, they ran from Pullman to Troy - and back.

McMurtrey took a vacation to New Mexico recently just to run. He's run up mountains and across deserts and through chest-deep rivers.

Running is something spiritual for McMurtrey - even though that's an idea he used to laugh at. It's a way to be free and connect with his body.

Until three years ago, McMurtrey wasn't a runner.

He'd run a little during his time in the Army, "but that was like you have to run kind of stuff," he said. "It wasn't for fun."

One day he called his dad, who sounded out of breath when he answered the phone. McMurtrey asked if he was OK, and his dad said yes - he'd just been on a 20-mile run to train for an ultramarathon, which is any race longer than 26.2 miles. He suggested McMurtrey should try out a race, too.

McMurtrey was athletic but had always written off organized runs. Why sign up when he could just go out and run whenever?

"But the thing was, I never did go out and run on my own," he said.

He started thinking about ultramarathons, then talking about them. His boss in Washington State University's writing program gave him a Runner's World article about the 56-mile Comrades Marathon in South Africa, the largest ultramarathon in the world.

Last year, he did.

McMurtrey's dive into the sport of ultramarathon running has been incredible. Most distance runners start gradually, running a 5K, then a 10K, a half-marathon, then a marathon.

He ran his first ultramarathon - a 50K in western Washington - just months after he began training. It was his first major race.

Now, he races all over the world. Running organized races is "just an excuse to go someplace new," he said. " ... The race itself is secondary to actually getting out there and running."

The Comrades Marathon was his first trip to Africa. Thousands and thousands of people gather every year for the race, which takes 12 hours, is shown live on TV and attracts huge crowds of fans that line the course.

Everywhere he went in South Africa, people would talk to him about the race.

"They're so proud of this race, they look at you like you're already a hero for just coming to attempt it," he said.

In 2008, McMurtrey entered an ultramarathon in Iceland.

He ran "over lava flows and glaciers ... the most surreal landscape in the world."

One of his major races this summer is an ultramarathon in southern Utah with his dad, who had a quadruple bypass but is slowly getting back into running.

McMurtrey also will run a 50K mountain race in British Columbia, just north of Vancouver. Mountain races are his favorite, he said, because they immerse him in nature and require a different mindset than more urban runs.

"When you're out on a road there's not a lot to worry about than how fast you're going to go," he said.

But on a mountain, runners deal with changes in elevation, bodies of water and a far greater lack of help. A city marathon might have aid stations every few miles, but mountain runs may only have one or two places for runners to refuel. Because McMurtrey often has his dog with him, he has to pack extra food and water for her, too.

McMurtrey's next goal is to race in South America - maybe a race that follows the Peruvian coastline, or a 28-mile run along the Inca Trail to Machu Picchu.

Such trips are expensive, however, so he hopes to find sponsors to support him. He doesn't have any paying sponsorships yet, but this year he was selected to be part of the "Inspire Daily" program for Brooks running shoes and gear. The deal provides him a race uniform, deals on his favorite shoes and a community of runners to be part of.

With all the races across the world, McMurtrey still loves running close to home. He moved to Pullman six years ago from Houston, and has "fallen in love with the Palouse and the Inland Northwest."

He's run through the Snake River Canyon and completed the WSU 100K through Whitman County, but more than anything he enjoys the peace and beauty of Moscow Mountain.

"Me and my dog, sometimes we'll go out on a Saturday and we'll run 30 miles out there."