Some snow, some rain, and winds knocking over trees like toothpicks.

I like feeling rain on my face when I'm running.  Yes, Sadie needs a bath when we get home, but it's worth it.  The best thing about the weather turning sour is that Sadie and I will usually have the trails to ourselves.

After work earlier this week the weather was particularly wild when we made our way up to Moscow Mt.  We were the only car parked at the trailhead of my favorite 5.5 mile loop.  Seems the wildlife weren't expecting any visitors with the weather being so poor because they were out in force.  Sadie chased maybe a dozen deer (I tell her she'll never catch one) and had a couple epic battles with her nemesis: the squirrel.  But we see deer up there all the time.  What we've never seen until this run was a bear.  I was hammering a downhill when out of the corner of my eye I saw something off to the left: 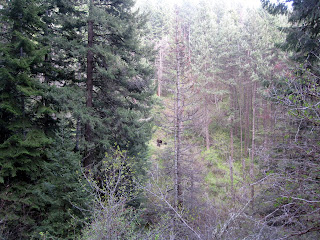 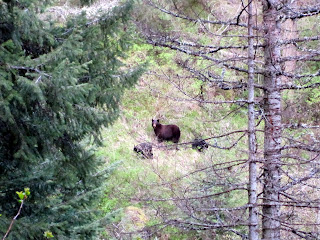 Momma had her eye on me for a couple minutes

Momma watched us for a few minutes then trotted uphill into some bushes.  I made a mental note not to run by that bush on the way back.  There's a grizzly research center in town that we run by sometimes and we can watch them out in their field playing around.  But that's with two layers of electric fence between us.  It's a little different seeing them out in the wild.  Bears make me nervous.  I'm glad my first encounter was a safe one.

Sadie wasn't very impressed with the bears.  "Boring," she said. "Can't we keep running?"  She had more important things to deal with.  There was a squirrel that was taunting Sadie like she'd never been taunted before.  It would climb the tree a couple feet out of the reach of Sadie and just stared at her.  Sadie was going crazy. 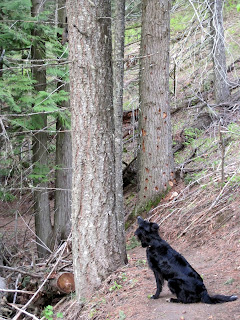 "Don't worry, squirrel. I won't hurt you."
(you can see the squirrel on the left side of the tree) 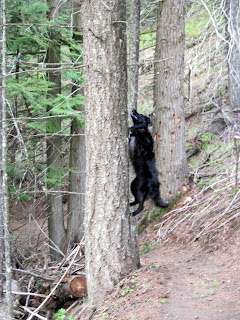 Sadie climbing the tree. She climbed higher
with each try and finally the squirrel took off.
Today Sadie and I did 20 miles in the rain.  She'll be joining me for a 50k trail race next month, so we need to make sure she gets in shape.  :)  My next race is the Coeur d'Alene Marathon on May 30th.

"I always loved running...it was something you could do by yourself, and under your own power. You could go in any direction, fast or slow as you wanted, fighting the wind if you felt like it, seeking out new sights just on the strength of your feet and the courage of your lungs."
-Jesse Owens