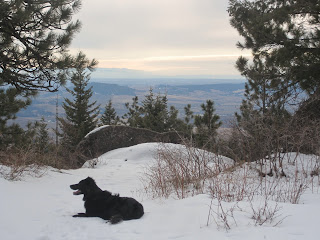 I was told I post a lot of photos of Sadie. Yes, that is correct.

We've received a lot of rain the past couple weeks in the lower elevations and the hills are snow free. So, hoping for unexpected snow melt in the higher elevations, we decided we'd give the trails up on Moscow Mountain a shot. There was still a lot of snow up top, but for the most part it was clear and worth the trip.

Next Saturday, my brother is getting married in Houston. After the reception a few of us are making a late night drive to Austin for Sunday's Austin Marathon. I'll be running with two of my sisters, Melanie and Lisa. My dad had hoped to run, but he's playing it safe on his running road to recovery, so instead of trying to squeeze out 26.2 miles he'll be cheering from the sideline. It should be a fun trip.

I hope everyone is well.