My brother was getting married in Houston on Saturday, Feb. 13. After the evening reception, a few of us thought it would be a great idea to make a little drive to Austin for a Sunday morning marathon that I would be running with my sisters Lisa and Melanie. We arrived at our hotel around midnight and left the hotel a bit after 5:30am to get our spot at the starting line. Not much sleep, but we knew it would be a hectic trip. My dad had hoped to run it with us, but being just over a year removed from a quadruple bypass he's simply not ready for a marathon (but he's close!). So this time he was there as crew/spectator. 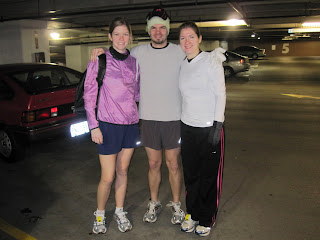 Lisa, me, and Melanie in a parking garage near the start 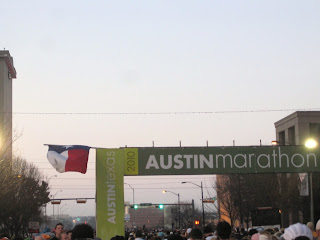 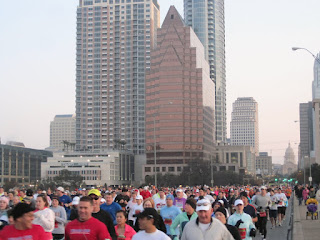 Looking back toward the start and the Texas Capitol 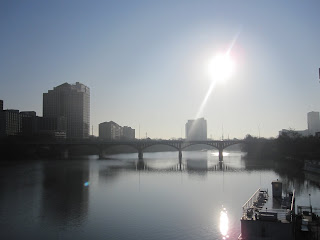 We were feeling good. It was a good day. 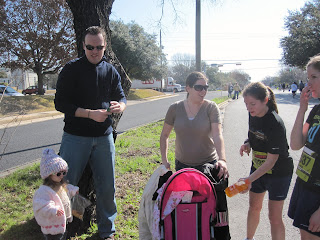 Melanie's goal was 5:14:00, which is a 12-min mile and 25 minutes under her first marathon time. All three of us had a goal of crossing the finish line together. It was cold at the start but warmed up nicely after a couple of miles. The crowds were friendly and the sun was out. Running a marathon is a great way to see a city.

Austin is the Live Music Capital of the World, and there were plenty of live musicians along the route - some of them were even good. Water stations were at ever mile and during the second half there were Powerade stations every other mile. The course was pretty flat (yeah, I know, this is coming from a guy who spends most his time running mountain trails), though there were a couple little hills that can get your attention. Overall it was a pleasant course.

Melanie was doing great and past the halfway point were were slightly ahead of schedule. We expected to slow down considerably during the last few miles and I told Melanie not to worry about the time so much. I know she wanted to hit her goal time, but I don't think she was stressing it too much. The most important part is that three siblings from three different parts of the country were together for a nice and easy 26-mile Sunday morning run. But as we were passing mile markers after mile marker our pace wasn't slowing much. Even with some extended walk breaks in the last couple miles we were still right on pace. 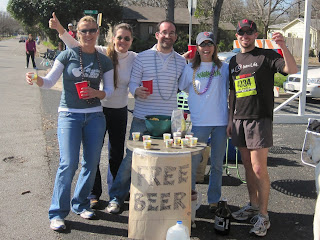 Some aid stations were better than others 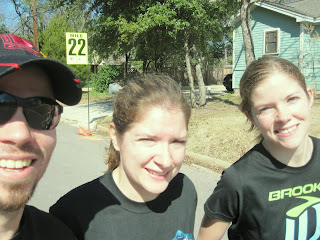 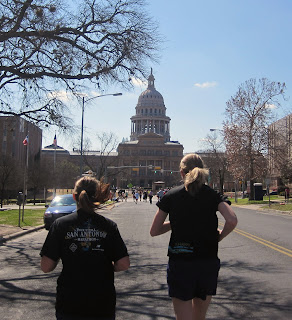 Finish line on the other side of the Capitol

We hit a nice groove with less than a mile to go and pushed it toward the finish. There always seems to be a burst of adrenaline near the end. We planned to cartwheel across the finish line together and as we neared we slowed a bit to create some space between us and the runners in front of us. But sure enough, right as we were about to cross a couple runners sprinted up behind me and Melanie to block our attempt. Lisa was in the clear though, and completed her finish line cartwheel.

I usually run these race alone, so these opportunities I get to run with my family is special. Congratulations to Lisa and Melanie. They are both ready for their first 50k. :) 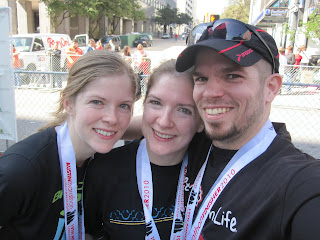