On Running and Blogging and Sorting Things Out

It's been a tough few months but things are starting to sort themselves out. Sometimes you ultimately have no control over things and you have to deal with what happens. I'm in the "dealing with it" stage. But I have Sadie and because she needs her exercise I've been good about getting out on the pavement and gravel for some running. Who knows how much I would have been running without her. And my dad says it's about time I start posting some photos.

Dad's doing very well. He's walking a lot and is feeling stronger everyday. We are all thankful he will recover fully and be back on the trails soon.

We had a couple big back to back snowstorms around Christmas which limited my running options with Sadie. Lots of snow. Here's a photo of Sadie and her trusty ball in the front yard: 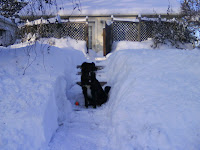 There was a one mile stretch of a bike path that was plowed regularly so we went there for a couple weeks and did a bunch of one mile out and backs. Not the most fun but it still beats a treadmill. Actually, it was pretty fun. Sadie loves the snow and it's always fun watching her bounce around and dive headfirst into the snow. She even caught an owl! She didn't know what to do with it when she got it so just left it and ran off. I think it might have been old or sick because it didn't put up much of a fight.

Almost all of that snow has melted now. Temps have cooled again and we've got a bit of snow the past two days. Yesterday we went on a nice run around WSU's new golf course. It's closed for the season and open to runners and x-country skiers. I took my camera for the first time in a couple months. I don't like winter, but it's beautiful, isn't it? 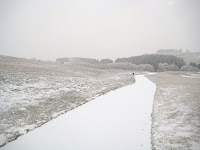 Sadie gets impatient waiting
for me to take photos. 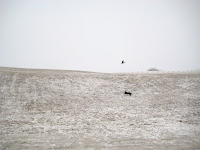 This hawk was teasing Sadie by just sitting on the
ground and not moving. Sadie sprinted toward it
and this photo just misses the dramatic leap. 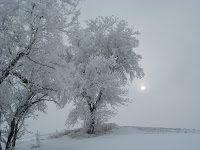 Sun nearly blotted out by the fog.

I don't have any races on my schedule yet. I'm eyeing the WSU 100k in April. I think I'll try to make that happen this year. In the meantime, I'm ready to get back to blogging. It was a break I needed but I look forward to catching up with everyone. Hope everyone is doing well.

Keep running! (through winter and snow and life)