Winter and Snow and Stuff

Winter came fast this year, even if the snow was late. I've been taking a self-inflicted break from blogging the past couple months. Life has been happening. I'm on a semi-running-break, too. I'm still running 4 times a week, at least, but I haven't been on any long (more than 12 miles) since late-October. Life's been hectic and I'm trying to sort some things out.

Also, for those of you who know my dad please keep him in your thoughts - he had quadruple bypass heart surgery last week. He was on a run with his school's cross-country team last Monday and passed out mid-run. They took him to he hospital and ran some tests and saw some clogged arteries that needed fixing. The doctor said because of his running his heart is very strong and there was no heart damage. And if his heart wasn't so strong it might have been worse than just passing out. He'll be back running stronger than ever in a few months. Be careful out there everyone. Here's a photo of me and my dad after the White River 50 in July: 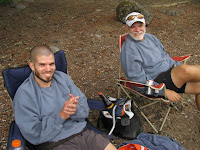 We've been hit hard with snow the past couple weeks and expect to see more this week and the next. There's a paved trail in town that gets plowed for a mile stretch so that's where Sadie and I have been running.

I've canceled my trip to Texas next month to run the Bandera 100k. Too much is going on. I may keep my eyes open for the WSU 100k in April. But right now I'm just trying to get things on track and hopefully I'll be back in blogland regularly very soon.