"Nonsense," I said. "Those rain clouds will burn off within an hour."

I was confident, of course, that what I said was true. I'd been in Iceland long enough - four days - to be an expert on Icelandic weather and quite sure that the morning clouds always burn off "in minutes." They had each day we were there and those days turned out to be sunny, mildly warm, and rather lovely. So why would I expect otherwise this morning?

"No sense carry my rain gear if I won't need it. Heck, I'm wearing quick-dry clothing if it starts to rain." I threw my wet-weather stuff back in my bag. I like going minimal anyway. As my starting wave was directed to the line I nearly threw my long sleeve shirt and gloves to my sister thinking that it would be warm enough in an hour or so that I'd just be carrying them instead of wearing them. No one else was taking off layers, though, so I kept mine on. Turns out this was the smartest decision I made all day.

The only luxury that I really missed not having for my nearly two weeks away was access to weather.com. This may have been the first time I've ever gone for a run without seeing the weather forecast (at least four times) before I go out for the run. I'm kind of neurotic like that. Email? Surprisingly easy to live without. ESPN.com? Moderately easy to do without. Cell phone? Wonderfully amazing to be without. 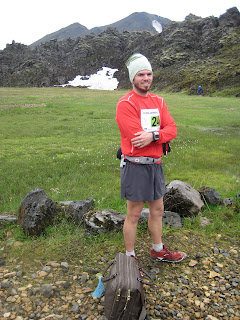 It will warm up, right?...
The Laugavegur Ultra Marathon (July 12, 2008) enjoyed its largest participation in its history - nearly 250 runners. To accommodate for the larger than usual numbers they broke the starters into four different group to help ease some of the congestion in the early mile climbs. I was in the third group and we started ten minutes after the leaders. 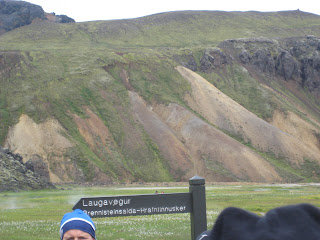 Start of the trail. Normally this 55km stretch is hiked in four days. 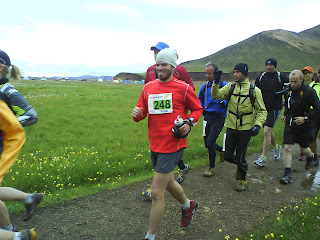 Running is fun, isn't it?

The first few miles are climbing. There will be more elevation gain in this section that any other part of the course and I try to focus on going slower than I feel like I can. My legs have been feeling as good as ever the past few weeks and I wanted to fight the urge to shoot out too fast. This section of the course is great for pacing yourself because with all the climbing there was a congo line of runners and not always places to pass even if I wanted to.

I felt like I was in a dream. The landscape is definitely something from another world. My new challenge was to fight the temptation to stop and take a photo every 50 yards. What I hadn't anticipated was the amount of strain that I was going to put on my neck just by looking in every direction. Several times I turned around - while trying to keep running - in the congo line just to catch glimpses from another angle of the ground we'd just covered. Lava fields, boiling hot springs running through snow, greens, yellows, rock, grass.

A few others had cameras and took photos every now and then. But most everyone else seemed to brush aside the beautiful terrain so they could focus entirely on the race! I began to feel guilty for even running. This is a trail that should be taken in over several days - not hours. 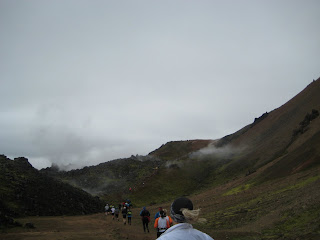 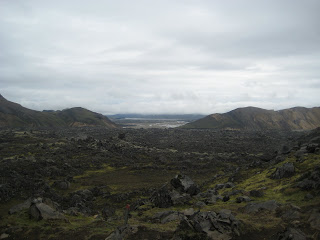 Looking back. The race began in the
valley in the background.

And then the rain began. First just a drizzle. Then the wind picked up. And we climbed higher and higher on the mountain and into those darn rain clouds that for some reason didn't burn off like I was sure they would. Then it started getting cold. The skin on my legs were turning red and ice started forming on my gloves and beard. I thanked myself for keeping my long sleeve shirt on. It may have been a much different race without it.

The congo line began to spread a little thin and then we started hitting a bunch of snow and it tightened right back up. My legs were feeling very good and I was ready to finish with the climbing so I could move down from the clouds. But we kept going up. 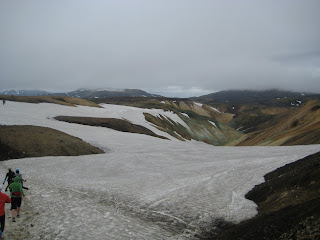 There was a lot of snow in the higher elevations.
Cloudy, but still some amazing views.
I can't image what these colors would
look like if the sun was shining. 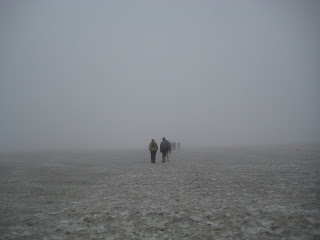 A long stretch into the void.
The trail had disappeared so you
just had to put faith in the footsteps
in front of you.
The first aid station was about 11km into the race. A bit skimpy compared with the other races I've run. Just water and pieces of banana. I think there may have been a sports drink too. The race packet made it clear that the aid stations would be minimally stocked so I was sure to bring some salt tablets and shot blocks to supplement. It feels like I say this in every race report, but I still feel that my weakest point with my running is fueling myself. I'm a minimal fueler. I carry as little water as I can get away with and as little food as I can get away with. Maybe when I shoot for a 100 in the future I'll have to figure something else out. But I guess I'm doing okay with how I'm doing it now.

A few kilometers after the aid station the trail finally started going down. The rest of the course would be a "gradual" downhill to the finish. This next section was my favorite part of the course. And yes, it's still cold and raining. 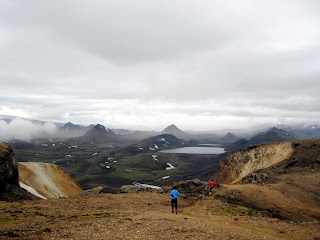 From this ridge were some of the most
spectacular and surreal views I've ever seen. 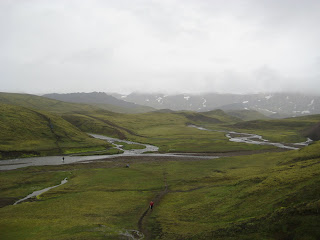 Looking back down the trail and across
the river we had to wade through.
The designers of this course weren't familiar with switchbacks. The ups were straight up and the downs were straight down. There are advantages to this, I suppose. The shortest distance between two points is a straight line, etc. But, man, it sure burns the quads on those straight downs.

There were several small river/stream crossings along the rest of the course. At one point the wind (and cold and rain) had picked up so hard that a group of about six or seven of us were literally huddled together as we ran across a ridge on the way down to a river. My feet have never been so cold as they were crossing these rivers. I don't know what the exact temperature was but it had to be in the low 40's most of the race. Maybe colder. And most of the streams were coming from glaciers that you can see up the mountain. The water must have been 32.5 degrees. After a couple crosses my feet were so numb that the only thing I could feel was the top of my shoes against my ankles. A couple hundred yards or so later I could wiggle my toes again. It's no wonder I came down with a cold. 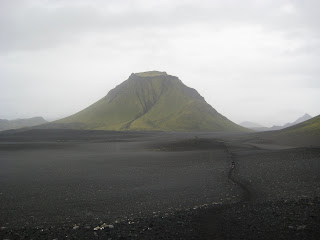 Long stretch across black fields
of crushed basalt. This was a good, flat(ish) section
where I could stretch out my legs.


The third and final aid station was about 15km from the end. I had hit a low point and needed a serious boost. To my wonderful delight this aid station was stocked with chocolate! Wahoo! I stuffed my face, talked with a few thru-hikers ("You're doing how much of the trail today?), and took about a five minute rest. But it was still raining and cold and I wanted to get to the end as soon as I could so I headed back down the trail.

I had the boost that I needed and decided it was time to see how much I had left in my legs. I pushed pretty good from here and felt good most of the way. It's always a mental boost, too, to have something left in my legs at the end because I start passing several other runners.

One section down in a canyon there was a wet, steep, rocky descent where you needed a rope to virtually rappel down a small section. It was fun. 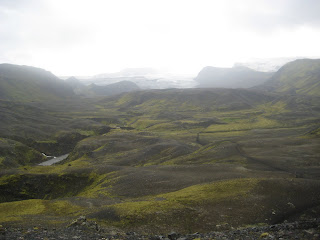 Looking back at another
valley the trail runs through.


I started running past a lot of hikers. A lot. Most with full packs. I was amazed at how supportive they were of the runners flying by on the trail. They respectfully stepped aside and most of them clapped and cheered as the runners ran by. It would have been very easy for them to be annoyed that 200+ runners were hogging the trail. Surely they weren't making good hiking time having to step aside for all of us.

"Only 5km to go!" some volunteers yelled about 7 or 8km out. Well, it sure felt like more than 5km. I was getting a bit tired at this point and was sopping wet and cold. I was ready to finish and as quickly as possible. 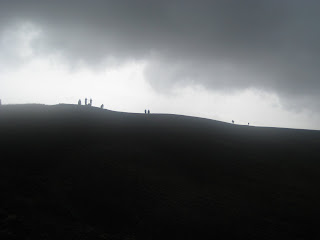 This was a neat view along a ridge
near the end of the race.


There was a surprise waiting for us after the final river crossing - trees! After 30+ miles of treeless lava fields we were suddenly shot into what seemed like a jungle. It was the weirdest thing. Another person yelled, "Only 2km to go. Maybe 3." I mentally rationed for 4. 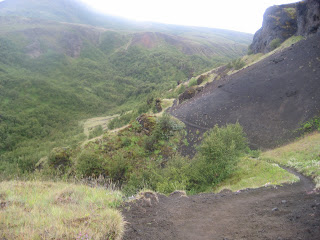 
Soon there were spectators on the trail, so I knew I must be getting close to the end. Their cheers and encouragement pushed me through the last bit until finally I turned the corner and saw the finish line. My sister, Megan, was waiting at the end with a big smile on her face and a big warm jacket on her back. I was jealous. 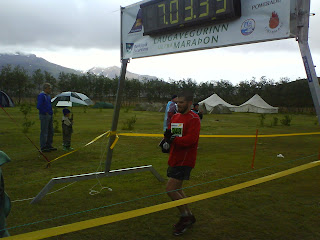 
It was a great race. My official finish time was 6:53:33. Ten minutes past the clock time. Official results.

There was a bbq afterward with nice big steaks that tasted so good. So good.

I looked through my photos from the race and I took over 60! Hopefully you've enjoyed my picks for the post.

Now I need to go get some rest because a week from tomorrow is the White River 50. My dad is in town and will be running the race too.