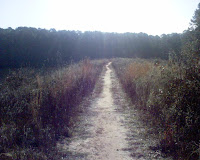 I love the smell of Texas. The thick, pine-scented air. Let me lace up and start this thing and see how it goes. Heck, I paid for some time on the trail so I might as well get some use out of it. And I bought a new pair of shoes that needed breaking in.

We watched the 100 milers start and this was my first up close and personal encounter with those crazies. I realized that I still have a long way to go before I'm ready for a 100. Each of those runners had a crazy, almost unhealthy, look in their eyes. Definitely a breed of their own. Maybe one day... 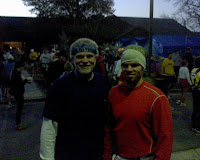 Pre-race
Since I had no idea what to expect out of my knee (yes I did - I knew the outlook was bleak at best since my longest run since November was 8 miles) I had originally planned to skip this run and crew for my dad. I didn't want to chance hurting my knee even more. But, I convinced myself, since it was a three loop course surely I could at least start with my dad and run as much as I could, presumably at least one loop. So that's what my top goal was. Run one lap (~17 miles) and take it from there. If it got too bad I could quit, right? I'm not addicted. I can quit anytime I want.

We started slow and kept getting slower. Which was fine for both of us. I wanted my knee to last as long as possible and Dad wanted to make sure he didn't start too fast. Temperatures were cool and we were excited for the day ahead.


(Video of the start of the race)

After a mile or so I made it a point to talk as though I was going to finish the entire race. I wanted Dad to focus on his race and not worry about me and my knee. If I had to drop then I'd drop. But to keep the spirit up it was fun to talk as though I planned to run it all. So we made a few goals during the early miles. Our A goal was to finish in 12 hours, B goal 13 hours, C goal 14 hours. One of the great things about this course that played to our favor in our (my) current predicament was that there is virtually no time limit for the 50 milers. 50 milers could be on the course as long as the 100 milers were out there. So if worse came to worse someone could take 29 hours to finish the course. Not having time restrictions was a blessing that allowed us to just keep moving. 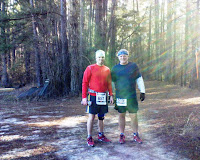 Notice I'm still smiling. This
is a good indication that the
photo was taken within the
first three miles of the race.
Dad kept asking how my knee was and it was feeling just fine for the first 10 miles or so. We took it very easy, though, with liberal walk breaks. Around mile 10 the recognizable discomfort began to surface in my knee. Keep going, keep going, keep going. There was no discomfort when I walked, so we walked often. Just keep going. Dad was looking good and I could tell he was feeling good enough to dart off down the trail without me. But he stuck with me.

The Rocky Raccoon course was virtually rockless - though my brother said he saw a raccoon rummaging through some trash near the start line. Most of the course is packed dirt single track. 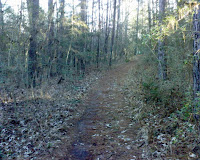 But the goodness had an evil twin. 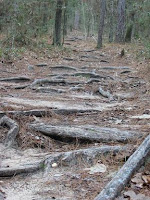 There were enough of these roots
to make you wish you had a chainsaw
- or hovercraft
(photo from race website)
Loop one finished and I wasn't feeling great. But I wasn't feeling too bad, either. I figured if I could do one lap without too much pain then I might as well try another lap. Lap 1 time was just over 4 hours. So we were close to our A goal pace.

After about 5 miles into the second lap it was pretty obvious that maybe I had made the wrong decision by not dropping after the first lap. My leg muscles (yes, all of them) staged a mutiny. They obviously didn't want me making decisions on their behalf anymore. I told dad I could keep going but I would need to slow down considerably. He was in no hurry himself so he decided to stick around.

Each aid station kept getting further and further apart. It's weird how that happens. I will say that the aid stations were simply wonderful. By far the best of the few races I've done so far. The organization was top notch and everyone's Texas hospitality shined. 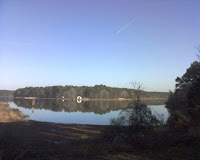 There's the lodge and the
end of each lap. So close,
yet so far away. :(
Around mile 26 I was losing it fast. Losing motivation. Losing strength. Losing any will to live. 8 miles to the lodge and I'm dropping. But I could never get there. This was the slowest and lowest I've been on a run yet. The pain in my knee had reached its pinnacle and I had to invent new ways to run/shuffle/walk/skip/trickle along the trail to try to find any ounce of leg muscle that still had anything left to give. This is when I felt the hotspot on the ball of my right foot. I'd never had a serious running blister before and I wasn't looking forward to this one, even if I was dropping in a few miles. The shuffle I had created to save my left knee was putting too much strain and friction on my right foot. Dad and I played the pro/con game of me continuing versus me dropping out at the end of the lap. The only "pro" we could think of was that I could get some good headlamp training in because the third lap would be several hours in the dark.

There were a number of these
bridges over the swampy areas
(backprint.com)
I found myself apologizing to Dad for being in so much pain because I didn't want to be a downer. He was looking good and had a hop in his step the entire race. He worked very hard since the JFK 50 in November to get ready for this race. He was focused and had a plan and knew he was going to get his first 50 under his belt. I was hurting.

I don't even remember the last few miles before we finished the second lap (~34 miles). I made up my mind that I was going to drop. Trouble is I didn't really know how to go about doing it. I told my brothers, who were crewing for us, and Dad that I was going to sit down and have some soup and take my shoes off. I thought that was a pretty good indication that I wasn't going to keep going. I spent about 15 minutes sitting there with no intention of moving. But Dad wasn't leaving and I had the feeling this was going to be one of those "I'm not leaving without you" situations. I was too tired to argue. 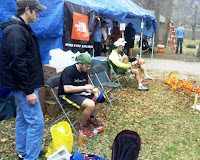 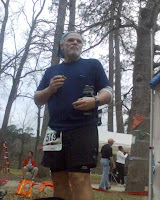 Dad looks way too happy
I needed a boost, though. Then I had the great idea that maybe if I just changed my socks all the pain in my feet would go away.

Heck, I thought, I've already been too laps. What's one more? So I laced back up. Dark clouds were coming in and we could smell rain in the air so we repacked gear and grabbed our rain jackets and headlamps. My brother asked if this was one of those moments he was supposed to not let me go for my own safety as though I wasn't in a position to make these kind of decisions. Yes, it probably was. But we're all just learning.

The last lap was started with the highlight of the day. Since we're on a loop course we get to see the front of the pack runners pass us once (or twice...or thrice). Jorge Pacheco, the 100 winner, passed us (again) around mile 35 and as he zoomed by Dad looked back at me with a smile then turned around and started running stride for stride with Jorge "just to see what it felt like." I was laughing so hard. I don't know if it was because it was so funny or because I was losing my mind. Jorge finally shook him after thirty or forty feet.

Does it look like a real smile?
(backprint.com)
The last three hours was in the dark. I don't know how they did it but at least ten times more roots were placed on the course. I must have stubbed my toes on fifteen thousand roots. FIFTEEN THOUSAND! I guess it pays to be fast and finish before the sun goes down.

We were coming up on the fourteen hour mark (our C goal) and we were still a ways out. Dad said he had something left in the tank so I told him to just run run run and I'll try to keep up. So we ran and ran and didn't seem to get much closer. I think we were running...

We didn't quite make the 14 hour goal, but we finished. Alive. Semi-standing.

(backprint.com)
I learned two things from this race:
1. Training for a race definitely matters.
and
2. I know I can push myself farther than I ever thought possible.

Congratulations to Dad on his first 50. Thanks to my brothers Adam and AJ for helping us on race day. Thanks to my Jeanie for providing the race day updates.

I'm going to take a couple weeks off. For real, this time.